From Heraldry of the World
Your site history : Keele University
Jump to navigation Jump to search 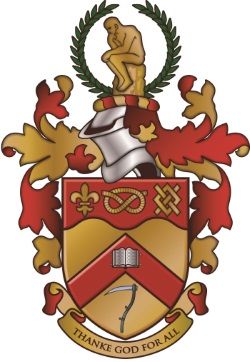 Arms : Or, on a chevron gules an open book argent, in base a scythe proper; on a chief wavy of the second a Stafford knot between a fleur-de-lys and a fret of the second.
Crest: On a wreath of the colours, In front of a laurel vert a representation of Rodin's statue "Le Penseur" Or.
Motto: Thanke God for all.

The arms were officially granted on June 20, 1950 to the (then) University of North Staffordshire.

Keele was founded in 1949 as the University College of North Staffordshire and the coat of arms was adapted from that of the Sneyd family, owners of Keele Hall and the Keele estate since 1540.

The scythe is the Sneyd family armorial device but the Sneyd shield featured a black scythe on a white field. The black-and-white colour scheme of the Sneyd family was not retained when the new College adopted red and gold at the behest of the founder, Lord "Sandie" Lindsay. Two colourful explanations have been offered for the choice of red and gold. One is that they are the colours of Marylebone Cricket Club at Lord's - the home of cricket - and a second is that they are the colours of the Labour Party. Both are plausible as Lindsay was a renowned Christian socialist, but the more likely explanation is that they were taken from the Staffordshire county colours.

The three devices in the chief represent the three local government authorities that contributed to the foundation of the new University College: the fleur-de-lys for Burton upon Trent, the Stafford Knot for Stafford, and the Fret (typically a symbol of industry representing the weave and weft of textiles) for Stoke-on-Trent.

A book and a representation of Rodin’s “Le Penseur” are symbols of education.

The motto "Thanke God for All" belonged to the Sneyd family and is visible in the stonework at many locations around Keele Hall - most prominently above the fireplace in the Great Hall.

The motto was adopted by the University and is heard every year at Graduation ceremonies in the University prayer: "May God give us grace to thank God for all".

Literature: Image and info from https://www.keele.ac.uk/thekeeleoralhistoryproject/keeleheraldrycoloursandscarves/