From Heraldry of the World
Your site history : Keighley
Jump to navigation Jump to search 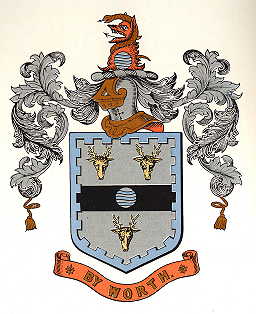 Arms : Argent on a Fess Sable between three Stags' Heads caboshed a Fountain proper all within a Bordure embattled Azure.
Crest : On a Wreath of the Colours in front of a Dragon's Head erased Gules entwined by a Serpent Or a Fountain proper.
Motto: 'BY WORTH'

The arms were officially granted on February 7, 1883.

The black fess is from the heraldry of the ancient family of Keighley, Lords of the Manor. In the reign of Queen Elizabeth I the heiress of the Keighleys car­ried the estate by marriage to the family of Cavendish, represented in the arms by the stags' heads. The roundel, or heraldic fountain, refers to the situation of Keighley in a well-watered valley, the streams of which have greatly tended towards the progress of the town, being of great value for manufacturing purposes. The blue embattled border shows that the arms are those of an ancient town - Keighley having obtained its original market charter in the reign of Edward I.

The dragon's head is also from the heraldry of the Keighleys and the serpent from the Cavendishes.

The motto, refers to the name of the principal stream on the banks of which Keighley is situated.

The arms are presently used by the town council.