From Heraldry of the World
Your site history : Kenilworth
Jump to navigation Jump to search 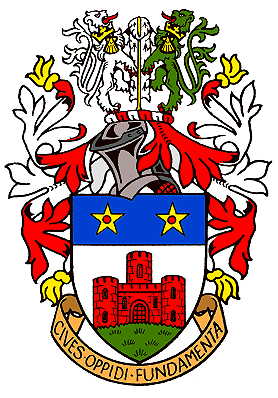 Arms : Argent on a Mount in base Vert a Castle of three Towers Gules on a Chief Azure two Mullets Or pierced Gules.
Crest : On a Wreath Argent and Gules an Ostrich Feather Ermine supported by two Lions queue fourchee the dexter Argent the sinister Vert each gorged with a Crown pendent therefrom an Escallop Or.
Motto: 'CIVES OPPIDI FUNDAMENTA' - Citizens are the foundations of a town.

The arms were officially granted on January 5, 1966.

The red castle represent Kenilworth Castle, one of the greatest in the Midlands, which appeared in a pictorial representation on the former seal of the Council. The castle in the arms is coloured red to indicate the local red sandstone of which it is built. The blue chief and golden mullets are from the arms attributed to Geoffrey de Clinton, Chamberlain and Treasurer to King Henry I, who founded both Kenilworth Castle and Kenilworth Priory. His arms were said to have been used by Kenilworth Priory (later Abbey), but they do not appear on the seal on the deed of surrender of the Abbey. A castle and a blue chief both appear in the arms of Lord Kenilworth, who purchased the castle from the Earl of Clarendon in 1937 and presented it to the nation.

The red and white of the wreath and mantling are colours the Warwickshire County Council. The white lion is from the arms of Simon de Montfort, Earl of Leicester, who held Kenilworth Castle from 1248, through his wife the sister of King Henry III. During the later war between the King and the de Montforts the Castle played a prominent role. The ermine ostrich feather was one of the badges of John of Gaunt, Duke of Lancaster, who inherited Kenilworth Castle in 1362. He spent lavishly in con­verting the Castle from a fortress into a palace and he erected the Great Hall. The green lion is from the arms of Robert Dudley, Earl of Leicester, the favourite of Queen Elizabeth I. He was granted Kenilworth Castle by the Queen in 1563, and entertained her there on several occasions.

The crowns and scallop shells, are from the arms of the Hyde and Villiers families, successive Earls of Clarendon, who held the castle from 1665 until 1937.