From Heraldry of the World
Your site history : Kensington and Chelsea
Jump to navigation Jump to search 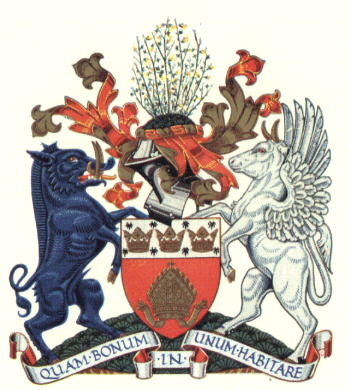 Arms : Gules a Mitre Or on a Chief Ermine three Crowns Or.
Crest : On a Wreath of the Colours issuant from a Mount Vert a Broom Bush flowered proper.
Supporters : On the dexter side a Boar Azure and on the sinister side a winged Bull Argent armed and unguled Or.
Motto: 'QUAM BONUM IN UNUM HABITARE' - What a good thing it is to dwell together in unity

The arms were officially granted on 10th December 1965.

The shield shows three crowns on ermine, symbols of royalty, and thus symbolising the Royal status of the borough. The mitre in the lower part of the shield symbolises the old connection between Kensington with the Abbey of Abingdon, and of Chelsea with the Abbey of Westminster. The crest shows a bush of Broom. This bush symbolises Brompton, an area in the borough and, in mediaeval times famous for its gorse fields. The blue boar is taken from the arms of the De Vere family, Lords of the Manor of Kensington for 500 years. The winged bull is the symbol of St. Luke, patron saint of Chelsea.

The motto is taken from Psalm 133 and means 'What a good thing it is to dwell togethe rin unity'.

Literature : Information leaflet provided by the Kensington and Chelsea council.