From Heraldry of the World
Your site history : Kingston-upon-Hull
Jump to navigation Jump to search 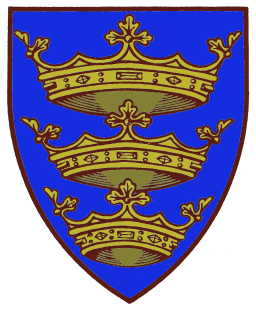 The arms have been in use on seals of the City since the fifteenth century. The arms were recorded in 1612 and in 1665/6. They were certified in 1879.

The three ducal coronets are believed to refer to the legend of the Three Kings, a motif used by many towns across Europe, representing trade with far off nations.

There is a tradition that these arms originated in the device of a local company of 'Merchant Adventurers', who likened themselves to the three Kings of the East who followed the star to Bethlehem, and is a motif used by many towns across Europe, representing trade with far off nations.

Another origin may be found in the arms of the City of Cologne, and the habit of those who imported fine linen from that City to set up the arms thereof as indicative of the wares they dealt in."

More likely is it that the crowns were adopted in token of Edward I, who, seeing its value as a port, took over the town of Wykeham-upon-Hull from the Monks of Meaux and gave it a charter, so that thereafter it was called the 'King's Town'. This simple explanation of the arms, which seems to have been obscured owing to the fact that nowadays the town is commonly called Hull, is supported by the thirteenth century seal which bears the figure of a king flanked by two lions and with a third at his feet.