From Heraldry of the World
Your site history : Kirkcudbright
Jump to navigation Jump to search 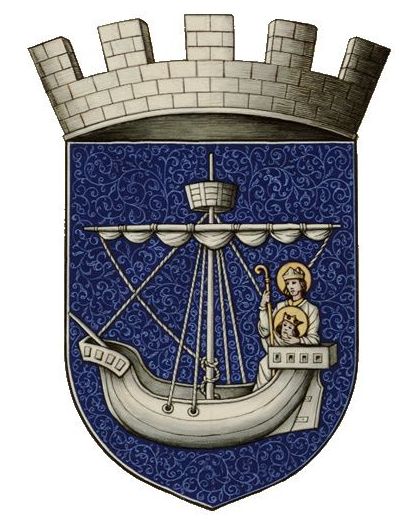 Above the Shield is placed a Burghal coronet.

Kirkcudbright, was probably a Royal Burgh by 1330.

The arms are based on the device on the oldest known seal of the Burgh of which a fifteenth-century impression is known.

Using the blue and silver colours of Galloway, they show St. Cuthbert, patron saint of the town and from whom it takes its name, seated in the stern of a ship, holding the head of the martyred King Oswald of Northumbria. Oswald, a champion of Christianity, was slain in battle in 642 by Penda, King of Mercia, who fixed his head to a stake. The head of King Oswald was later sent to Lindisfarne, where it was ultimately buried with St. Cuthbert's body and, with it, transferred to the Saint's final resting-place in Durham Cathedral.

The arms were matriculated in 1921 so that they could be displayed on the front of the Town Council gallery in the parish church.

In 1927, there was discussion with the Lyon Office about the addition of a motto, but nothing was ever settled.

The arms are now used by the Royal Burgh of Kirkcudbright and District.