From Heraldry of the World
Your site history : Krasíkov (Ústí nad Orlicí)
Jump to navigation Jump to search 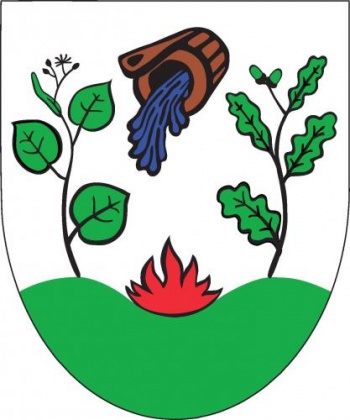 The first attempt to get arms dates from June 2011 when a first proposal was sent to the heraldic committee of the parliament. This proposal showed St. Florian, the patron saint of the village. Saint Florian already appeared on the seal of 1850, together with the image of the local chapel and, probably, a linden tree (see image below).

The committee reacted negatively on the proposal, on the grounds that St. Florian was depicted wrongly (a pitcher instead of a bucket) and that the saint by itself was not dinstinctive enough. Similarly, there have been older seals of the village, that did not (yet) show St. Florian.

One of the older seals dates from 1749 and shows two plants and a knife or plough iron. The municipality considered these not too distinctive either, and decided to combine the elements. As the village was inhabited by Germans and Czechs until 1946, two plants were chosen, the oak tree for the germans and a linden for the Czech population. Sint Florian was replaced by his symbols only. These were placed on a divided shield of silver and green.

Again this proposal was rejected on the base that the green plants could not be on a green field. This was then changed to the final arms with a different green base.

Literature : Images and information obtained from here and http://www.obec-krasikov.cz