From Heraldry of the World
Your site history : Kyle and Carrick
Jump to navigation Jump to search 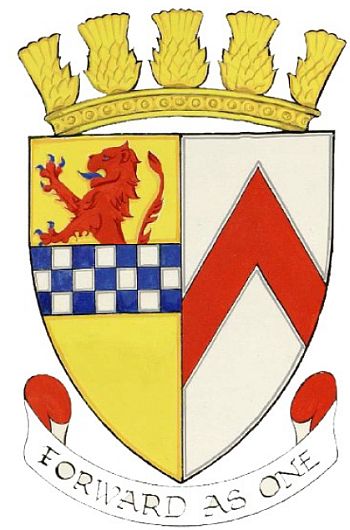 Per pale Or and Argent: dexter, issuant from a fess chequy Azure and Argent a demi-lion rampant Gules; sinister, a chevron of the Last.

Above the Shield is placed a coronet appropriate to a statutory District, videlicet:- a circlet richly chased, from which are issuant eight thistle-heads (three and two halves visible) Or; and in an Escrol under the Shield this Motto "Forward as One".

The arms combine elements for Kyle and Carrick. The lion and the bar are taken from the arms of John Sterwart, Lord of Kyle (later King Robert III), the chevron is the historical arms of the Earldom of Carrick. The motto indicates the unification.