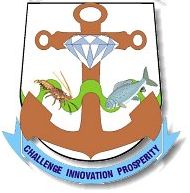 The new arms were adopted on ? 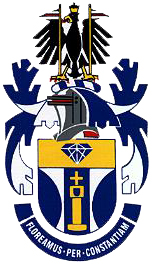 Luderitz was already discovered in 1487 by Bartolomew Dias, which is represented by the Portuguese padrão shown in the arms (a replica is still standing 20 km from Lüderitz). The top shows a diamond, as the town became prosperous due to diamond mining, after diamonds were discovered in 1908. The two flounches emanating from the side are symbolic for the bay area of Lüderitz. The crest is the German eagle, as the town was founded and named after a German trader, Lüderitz from Bremen. The two banners beside the eagle symbolise that Germany claimed the area of Lüderitzbucht as a protectorate on April 24, 1884 and that the flag was raised in the town on August 7th, 1884

The motto means Let us flourish trough perseverance, and symbolises the hard living conditions in this, waterless, town. Water previously had to be imported from as far as Cape Town. Nowadays a pipeline of 112 km transports water to the city.