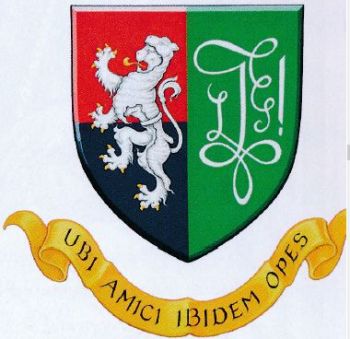 The arms were redesigned and adopted in 2020.

The Lamme Goden is a student fraternity in Gent. For about 10 years they used the arms as shown below: 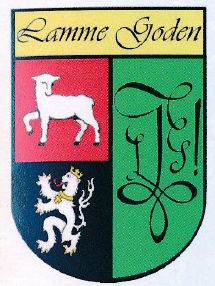 In 2020 they wanted to have their arms officially registered, which was not possible under the current rules of registration by the Vlaamse Heraldische Raad. But, in the process they upgraded their arms.

The original arms showed the letters of a student fraternity, with the letters LG for the fraternity. The lamb refers to the famous painting of the Agnus Dei (Lam Gods) in the Gent Cathedral, after which the fraternity was named. The lion was taken from the arms of the city of Gent. Black and red are the colours of the fraternity.

In the new design the lamb and lion were combined, as the use of the city arms was not appropriate. The result is a lion wearing a sheep skin.

The motto; Ubi Amici Ibidem Opes (where there are friends there is richness) refers to the purpose of the fraternity.