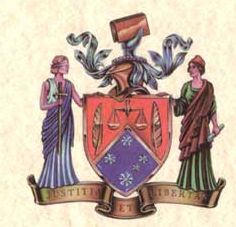 Arms : Per chevron Gules and Azure, in chief a pair of Scales between two Quill Pens Or, and in base a representation of the Constellation of the Southern Cross Argent.
Crest : Issuant from a Wreath of the Colours, a dexter Hand couped at the wrist proper clasping a Book bound in Calf also proper, edged Or.
Supporters : On either side the figure of a Woman, that on the dexter representing Justice, blindfolded and vested proper, holding in the exterior hand a sheathed Sword point downwards Or, and that on the sinister wearing a Phrygian Cap and vested proper, holding in the exterior hand a Charter, rolled and sealed, representing Liberty all also proper.
Motto: 'Justitia et Libertas'.

The two golden quill pens on either side of the evenly balanced scales of Justice, also in gold, symbolize the services of solicitors to their clients on opposing sides.
The white Southern Cross on blue is taken from the Arms of Victoria, and identifies the Institute with that State.

The volume held by the hand issuing from the wreath is one of Law Reports, and the Supporters are largely self-explanatory, the red Phrygian cap and the charter both signifying liberty.