From Heraldry of the World
Your site history : Leith
Jump to navigation Jump to search 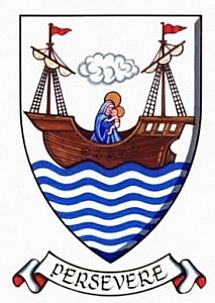 Argent, in the sea Proper, an ancient galley with two masts sails furled Sable, flagged Gules, seated therein the Virgin Mary with the infant Saviour in her arms and a cloud resting over their heads all also Proper.

In an Escrol below the Shield is placed this Motto "Persevere".

Leith was created a Burgh of Barony de novo in favour of the City of Edinburgh.

The arms show the Virgin and Child seated in a ship with a cloud above. The parish church of South Leith is dedicated to St. Mary, and the ship is for the port and its sea-going trade. The significance of the cloud is not clear; it appears that, during the discussions about the Grant of arms, the Town Clerk's suggestion that what appeared above the Virgin's head (and the ship) in an impression of an old Burgh seal was a protecting cloud, was accepted by Lord Lyon Burnett.