From Heraldry of the World
Your site history : Lliw Valley
Jump to navigation Jump to search 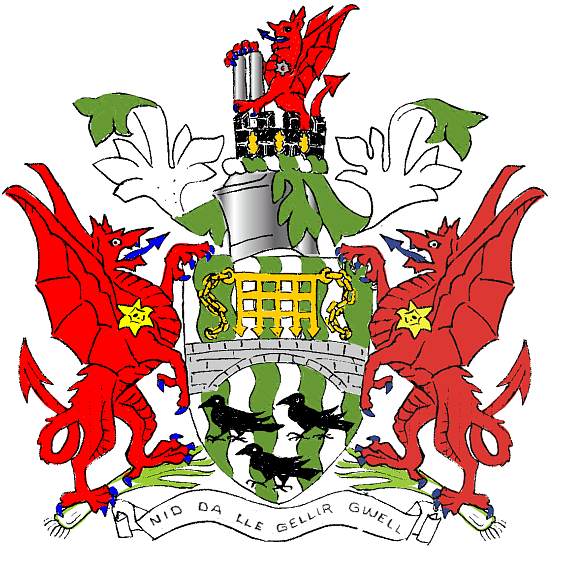 Arms: Paly wavy of eight Argent and Vert in fess a representation of the bridge at Pontardawe throughout proper between in chief a Portcullis chained Or nailed Sable pointed Gules and in base three ravens close proper.
Crest: On a Wreath of the Colours out of a Mural Crown Sable charged with five [three visible] Ears of Wheat Or a demi Dragon Gules charged on the sholuder with a Cogwheel and holding in the foreclaws a Pair of Millrolls erect proper.
Supporters: On either side a Dragon Gules charged on the shoulder with a Daffodil Flower Or and standing on a Leek the leaves inward proper.
Motto: 'NID DA LLE GELLIR GWELL'

The shield has a background of eight alternate white and green waves running vertically, to suggest the topographical area with its green valleys and four principal rivers, the Lliw, the Loughor, the Clydach and the Tawe. Against this are set the gold portcullis and black ravens from the old seal of the Borough of Loughor.

The portcullis is the crest of the Dukes of Beaufort, former lords of the Borough, while the three ravens are considered to be derived from the arms attributed by the mediaeval heralds to Urien Rheged, a 6th century prince or local chieftain who built his residence at Loughor, and whose descendants, the Rhys family of Dynever, still bear the ravens in their arms.

Between the portcullis and the ravens, spanning the shield over the waves, is the bridge of Pontardawe, which was part of the insignia of Pontardawe RDC. Thus the shield expresses the union of Llwchwr and Pontardawe in the Lliw Valley District.

The crest symbolises the area's industries. At the base is a mural (walled) crown, a frequent emblem of local government, and a reminder of the ancient castle of LLwchwr. It is coloured black, to suggest the coal-mining areas and is charged with three ears of wheat for the agriculture of the rural district. From the crown rises the Welsh dragon, charged on the shoulder with a cogwheel for engineering, and holding a pair of mill rolls for the steel and tinplate industries.

The supporters are necessarily different versions of the plain red dragons of the Llwchwr UDC device. In the latter, leeks are placed between the dragons and the shield. This is untenable in correct heraldic practice, so the leeks have been placed as a support for the dragons to stand on. For further distinction they are each charged on the shoulder with a gold daffodil flower taken from the centre of the Pontardawe RDC insignia.