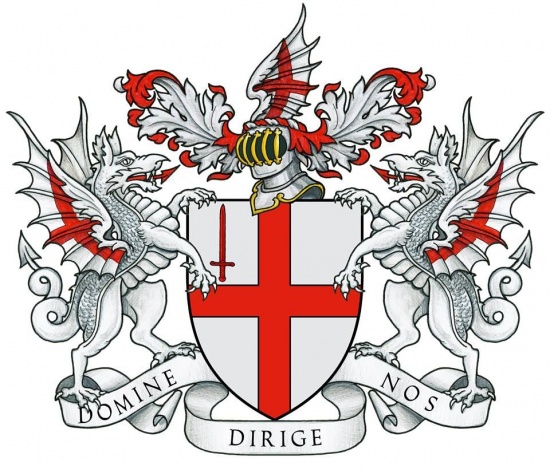 Arms: Argent a Cross Gules in the first quarter a Sword in pale point upwards of the last.
Crest: On a Wreath of the Colours a Dragon's sinister Wing Argent charged on the underside with a Cross throughout Gules.
Supporters: On either side a Dragon Argent charged on the undersides of the wings with a Cross throughout Gules.
Motto: 'DOMINE DIRIGE NOS' - Lord, direct us.

The arms of London have never officially been granted, but have been recorded at the College of Arms, albeit without supporters and crest. The crest and helmet were granted on April 30, 1957.

The shield combines the cross of St. George with the emblem of the city's patron, St. Paul. The first cathedral dedicated to St. Paul was built in 605 in the city. The patron saint itself already appears on a 13th century seal.

The arms appear for the first time on a seal from 1380.The sword has often been described or attributed to the dagger with which Sir William Walworth, Mayor of London, stabbed the rebel Wat Tyler on June 15th, 1381. The arms with the sword, however, predate this event. Another story states that the sword was granted by King Richard II as a reward for William Walworth's services to the King. There are, however, no historical evidences for either story. The dragons appear for the first time on an illustration in a book from 1633. The same book, the Survey of London, by Stow, also first mentions the motto 'Domine dirige nos' (Lord, direct us).

On a seal of the Mayoralty dating from the late 14th century the arms show two lion supporters. These are not seen elsewhere.
The origin of the dragons is not clear, it may be that they are derived from the story of St. George, the patron saint of England, in which the saint kills a dragon. The sword and the dragons thus distinguished the arms of the city from those of England.

The oldest known image of a crest dates from 1539 when they appear on the reverse of the common seal of the city. The oldest image is not very clear and looks like a fan-like object, charged with the cross of St. George. By the end of the 17th century, the crest has developed into the dragon wing (see image below). Sometimes the arms were shown with two wings, facing each other. 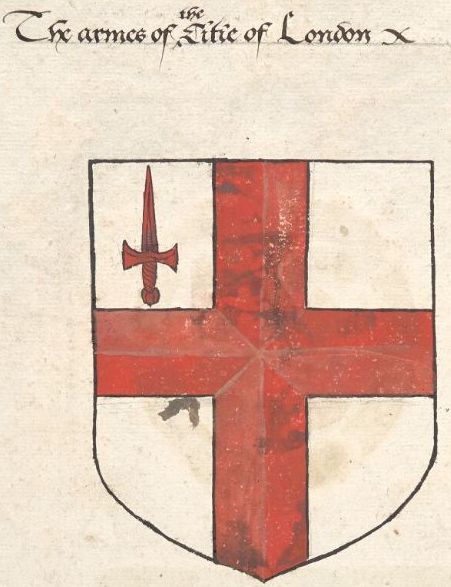 Besides the dragon wing, the arms are often seen in the 17th-19th century with a Fur Cap. It appeared for the first time in 1677 on a large image of the arms, which were surrounded by the cap, sword, mace, cornucopia, fasces, anchor and key. None of these elements have ever been used officially by the council.