From Heraldry of the World
Your site history : Lowestoft
Jump to navigation Jump to search 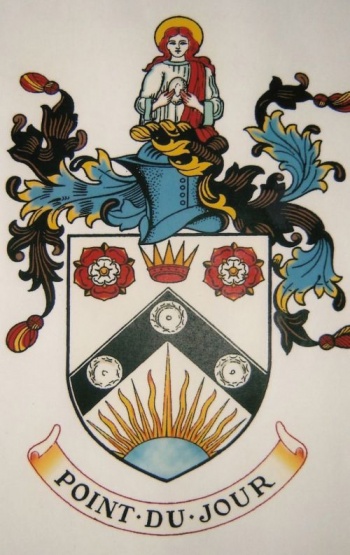 Arms : Argent on a Chevron Sable between in chief an Antique Crown between two Roses Gules each Rose charged with another Rose Argent all barbed and seeded proper and in base a Sun issuant Or three Lowestoft China Plates all proper.
Crest : On a Wreath of the Colours a demi figure representing St. Margaret holding in the hand a Pearl all proper.
Motto: Point du jour

The arms were officially registered on February 14, 1913.

Suffolk, and therefore Lowestoft, is on the east coast of England and are among the first places to see the sunrise. The town is located on what is known as the Sunrise Coast. The motto "Point du Jour" means daybreak. Thus the sun at the base is a reference to this. The arms of Suffolk also show a rising sun.

The roundels on the chevron represent porcelain plates to refer to an 18th century factory in the town. Their product is much admired and collected. The factory has no mark, but many bear the words, "A trifle from Lowestoft."

The Tudor roses, the crown and the crest are a reference to Saint Margaret of Scotland, the town's patron saint. She already appeared on the old seal of the town, as can be seen on the pre 1913 postcards.