From Heraldry of the World
Your site history : Mackay
Jump to navigation Jump to search 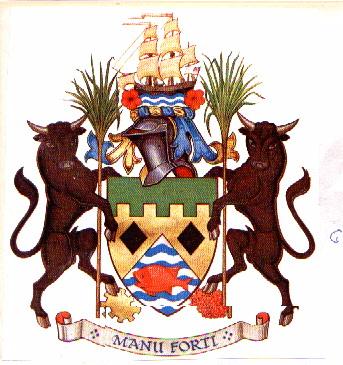 Arms: Per Chevron Or and Barry wavy Argent and Azure in chief two lozenges Sable and in base a Red Emperor Fish naiant proper a Chief embattled Vert
Crest: On a wreath Or and Azure between two Hibiscus Flowers a representation of Captain Cook’s Ship the Endeavour Bark proper on Water Barry wavy Argent and Azure
Supporters: On either side a Steer guardant each supporting between the forelegs a Cane of the Sugar Plant leaved proper that to the dexter resting the interior hind hoof upon a Roundel embattled Or and that to the sinister resting the interior hind hoof upon a piece of Coral proper
Motto: Manu Forti

The waves and the Red Emperor, a popular reef fish, symbolise mackays position as "the gateway to the Great Barrier Reef’.

The chevron is taken from the arms of the Clan Mackay, as the town is named after Captain John Mackay, the discoverer of Mackay. The two black lozenges refer to the coal mining in the area.

The embattled chief symbolises that Mackay is a city.

The Hibiscus is the floral emblem of Mackay and so is included in the Arms. The representation of Captain Cook’s ship, Endeavour, recalls the initial discovery and exploration of the Whitsunday area in which Mackay is situated.

The cattle symbolise the cattle and dairying industries. The cane refers to the sugar industry. The cog wheel symbolises industry whilst the coral refers to the tourist industry and the Great Barrier Reef.

The motto means "With a strong hand" and is taken from the arms of the Clan Mackay.