From Heraldry of the World
Your site history : Mafikeng
Jump to navigation Jump to search 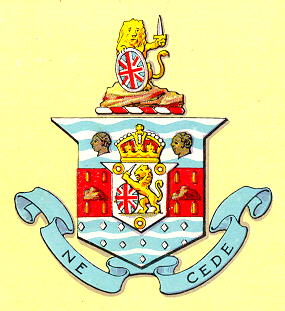 Mafeking's claim to fame is that the town successfully withstood a lengthy siege by Boer forces during the Anglo-Boer War (1899-1902). This probably explains the motto "Ne Cede" (Do not yield) and the triumphant sword-brandishing English lions with their Union Jack shields. The inescutcheon also contains three golden annulets, which may be derived from the Cape Colony coat of arms.