From Heraldry of the World
Your site history : Mallow
Jump to navigation Jump to search 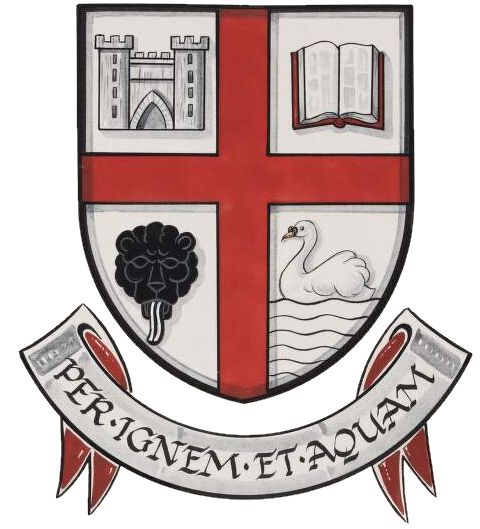 Argent a cross gules: in the first quarter a representation of the old castle at Mallow proper, in the second quarter an open book of the last, in the third quarter a lion's head affrontée sable the tongue charged with two pallets wavy of the field and in the last quarter the base watery thereon a swan in pride also proper. Motto : Per ignem et aquam.

The charges arranged around the central cross reflect Mallow's historical and literary tradition.

The first quarter refers to Mallow Castle. The original castle dates from 1185. When this fell into ruins in the 16th century a new castle was constructed nearby. This building remains a private residence to the present day; the older ruin is now a national monument. In the castle grounds can be seen the only herd of white deer to be found in Ireland.

The second quarter shows an open book for the writers and poets who have lived in the Mallow area. Among these were Thomas Davis (1814-1845) and Canon Sheehan (1852-1913) who was parish priest of the neighbouring town of Doneraile. Also near Doneraile can be seen "Spenser's Castle" where the poet Edmund Spenser wrote part of his work "The Faerie Queen", and Bowen's Court where Elizabeth Bowen was born.

In the third quarter is a dog's head. The Dogs' Heads is the name of a fountain dating from the period when the town was noted for its spa. During the 18th century, crowds came to bathe in the waters which were believed to have curative properties. The town anthem The Rakes of Mallow dates from this period.

The fourth quarter shows a Swan. This refers to the Irish name Magh Ealla (the Plain of the Swan).

The motto "Per Ignem et Aquam" refers to the sacking of the town carried out by British forces in September 1920 during the War of Independence, and to the fact that the lower parts of the town are subject to flooding from the River Blackwater.