From Heraldry of the World
Your site history : Margate
Jump to navigation Jump to search 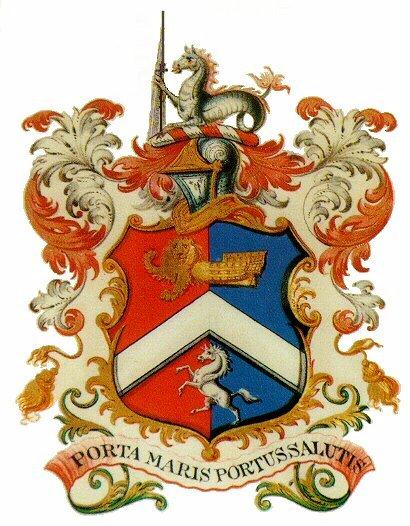 Arms : Per pale gules and azure, a chevron argent between in chief a demi lion passant guardant conjoined to the demi-hulk of a ship Or and in base a horse rampant of the third.
Crest : On a wreath of the coloours, A sea horse supporting the mast of a ship with yard and rigging, all proper.
Motto: Porta maris portus salutis

The arms were officially granted on 6 January 1858.

The upper part of the arms shows the lion-ship, symbol of the cinque-ports, and here derived from the arms of Dover, as Margate historically was part of Dover. The white horse is the horse of Kent.The crest shows a seahorse and a beacon, symbols for the harbour. The motto means "A gate of the sea and a haven of health."