From Heraldry of the World
Your site history : Marion
Jump to navigation Jump to search 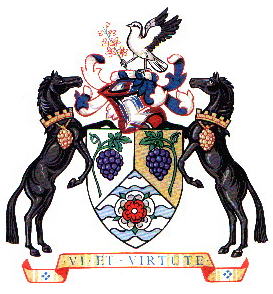 The wavy base symbolizes the River Sturt, which runs through the municipality, identified by the bicoloured Rose, one of the charges on the Sturt family arms. The grapes and almond blossoms allude to the original primary industries in the area, while the horses represent the former Remount Depot at O'Halloran Hill, from which the Army drew its mounts. The mural crowns each with five crenellations, symbolize local government with the five wards of the City of Marion. The Shrike, properly a Magpie Lark [Grallina cyanoleuca], is the same species depicted in the State arms of South Australia.