From Heraldry of the World
Your site history : Maritime Services Board of New South Wales
Jump to navigation Jump to search 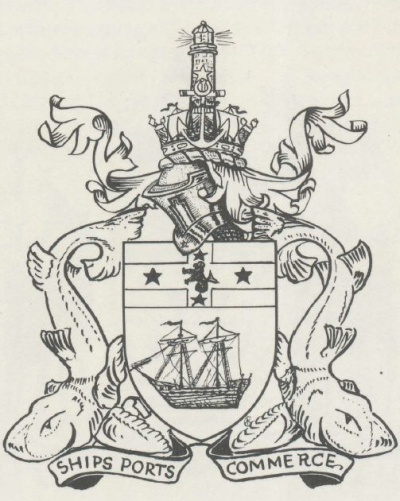 Arms : Azure, a two-masted Sailing Ship sails furled and pennons flying to the dexter Or, on a Chief Argent a Cross throughout Gules, charged with a Sea Lion between four Mullets Gold.
Crest : On a Wreath of the Colours, in front of a Naval Crown Or and issuant therefrom a Lighthouse Argent, the beams Or, an Anchor ensigned by a Mullet Gules.
Supporters : On either side a Port Jackson Shark (Heterodonius Portus-jacksoni) proper.
Motto: 'Ships, Ports, Commerce'.

The arms were officially granted on August 4, 1965.

The lighthouse, anchor, and naval crown are emblematic of the Board's maritime authority, the lion in the Arms of the State of New South Wales being here replaced by a sea lion to denote a maritime institution.

The two-masted vessel represents H.M.S. Supply, used by Captain Phillip when he arrived in Sydney Cove to found the first settle­ment in Australia, this vessel also appearing in the badge or device.

The Supporters are Port Jackson sharks, indigenous to the east coast of Australia, and named after the principal port in the area of the Board's jurisdiction.