From Heraldry of the World
Your site history : Maroondah
Jump to navigation Jump to search 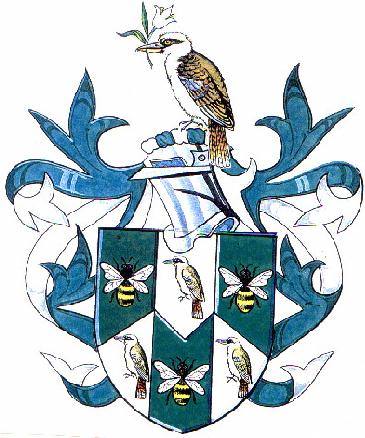 As the City of Maroondah was formed in 1994 as a result of the amalgamation of some other councils the new arms combine elements from the Arms and devices of the previous Councils.

The vertical green/white panels come from the Arms of Croydon where they allude to the green beauty of the trees in the locality and the former name of 'White Plains'. The indented division between the top and bottom of the shield reflects the chevron in the device of the Borough of Ringwood, and the dancetty barrulets in the shield of the City of Ringwood. The bees, representing industry and agriculture, come from the Croydon Arms, while the kookaburras were features of the former devices of Ringwood.

For its crest Croydon had a Cornish Chough holding a lily, Maroondah substitutes a Kookaburra. In both cases the lily refers to the Shire of Lillydale, from which both Croydon (1961) and Ringwood (1924) originally separated.