From Heraldry of the World
Your site history : Medway
Jump to navigation Jump to search 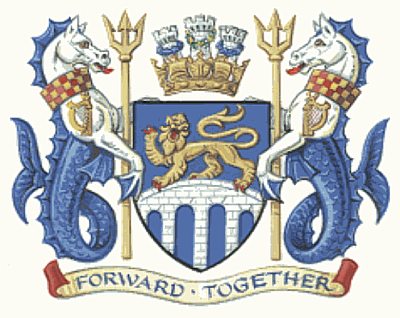 Arms : Azure upon a Bridge of four arches Argent a Lion passant guardant Or.
Crest : Out of a Naval Crown Or three Towers Argent the centre tower enfiled with a Wreath of Broom and the two outer towers enfiled with a Wreath of Oak Azure.
Supporters : On either side a Sea Horse Argent tails and fins Azure each gorged with a Collar chequy of the Or and Gules pendent therefrom an Ancient Harp and each supporting a Trident Gold.
Motto: 'FORWARD TOGETHER'

The arms were officially granted on 22 November 1999.

The arms show an English lion atop a bridge of four arches. This shows a new English council arising from four old ones. These were Gillingham, Rochester, Strood and Chatham.

The crest is based on that of the old Rochester-upon-Medway council. The colours have been changed and three wreaths added to the towers. The centre tower has a wreath of broom. This is derived from the sprig of broom in Gillingham's arms. The other towers have oak wreaths, coloured blue. The supporters are two sea horses. These are a maritime version of the White Horse of Kent, showing that this is a maritime district in Kent. The checky collars and tridents were used in the similar supporters of Rochester-upon-Medway. To them have been added harps, taken from the arms of Gillingham.