From Heraldry of the World
Your site history : Middlesbrough
Jump to navigation Jump to search 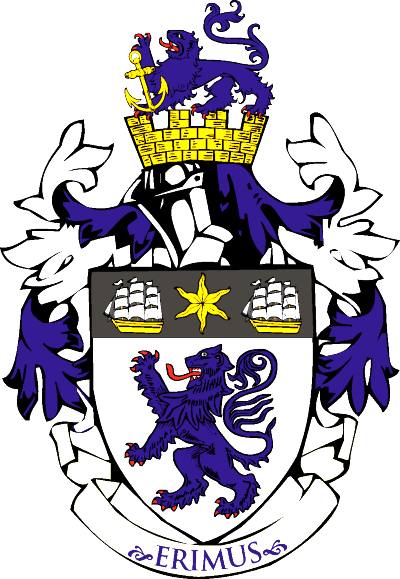 Created in 1974 from parts of Teesside

Arms : Argent a Lion rampant Azure on a Chief Sable an Estoile between two Ships Or sails Argent.
Crest : Upon a Mural Crown Or a Lion passant Azure supporting with the dexter fore paw an Anchor Gold; Mantled Azure doubled Argent.
Motto: 'ERIMUS' - We shall be

The arms were officially granted in 1976.

When Middlesborough was recreated in 1974 the old arms (see below) were slightly altered to reflect the changed area.

The central ship on the chief was replaced with an estoile, from the arms of Captain Cook, who was from the Stokesley area. The anchors were removed from the crown in the crest and instead the lion supports a gold anchor. 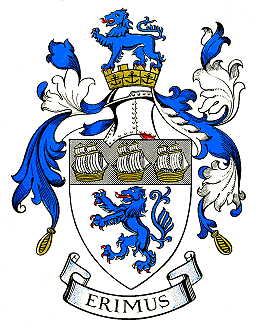 Arms : Argent a Lion rampant Azure on a Chief Sable three Ships Or sails Argent.
Crest : Upon a Mural Crown Or charged with three Anchors Sable a Lion passant Azure; Mantled Azure doubled Argent.
Motto: 'ERIMUS' - We shall be

The arms were officially granted on November 8, 1911.

Middlesbrough was incorporated as a borough in 1853, and immediately adopted a coat of arms, although this was not registered with the college of arms until 1911.

The arms showed the blue lion on silver of the Brus family. A black chief bore three sailing ships, showing the importance of ship building to the town.

The crest was a blue lion like that in the arms, upon a gold mural crown bearing three black anchors.

The motto has remained unchanged since 1853. It is adapted from the Brus motto and is appropriate for a progressive town.