From Heraldry of the World
Your site history : Millfield School
Jump to navigation Jump to search 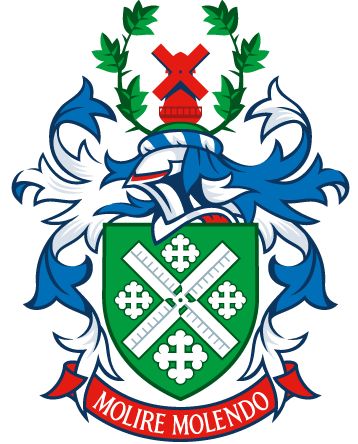 Arms: Vert, the sails of a windmill saltirewise between four crosses bottonee argent.
Crest: On a wreath argent and azure, On a mount vert a windmill gules between two branches of hawthorn proper.
Motto: Molire molendo.

The arms were officially granted on September 9, 1954.

The arms are largely canting; the crest shows a mill on a hill, in the shield the wind mill blades are placed on a green field. I have no information on the meaning of the crosses.

This is also a play on words. A mill achieves by grinding and pupils at a school achieve by hard work.