From Heraldry of the World
Your site history : Mine Countermeasures Ship USS Avenger
Jump to navigation Jump to search 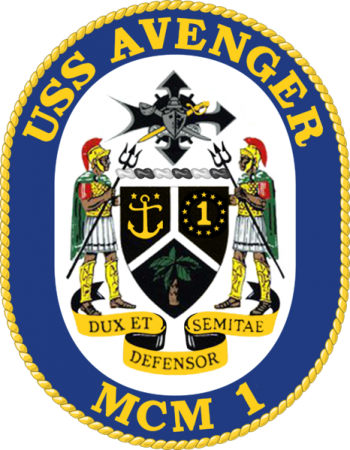 Blue and Gold is the traditional USN colours. The inverted Y represent a safe channel for passage, The Anchor and two stars symbolises the previous two ships that has been named Avenger. The number 1 symbolises the ship's hull number and the thirteen stars that surrounds it the following ships of the class. the Palmetto tree symbolises South Carolina where the ship was originaly homeported. The Crest shows the surface warfare badge superimposed on a Mark VI mine. The supporters are two Centurions holding tridents symbolising stength and courage required to face the danger of mine warfare. The Motto translates as "Guide and protector of the pathway".