From Heraldry of the World
Your site history : Mine Hunter USS Shrike (MHC-62)
Jump to navigation Jump to search 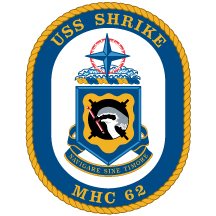 Shield: Or, a stylized horned mine Sable bearing a Shrike’s head, holding in its beak a baton bendwise Gules a bordure wavy Azure. Crest: Issuing from a wreath Or and Sable a wave of the sea Proper, overall an annulet Gules detailed Argent (in the manner of a compass) and superimposed by a polestar Azure. Motto: A scroll Azure fimbriated and inscribed “NAVIGARE SINE TIMORE“ Or. Seal: The coat of arms as blazoned in full color upon a white oval enclosed by a blue collar edged on the outside with a gold rope and bearing the inscription “USS SHRIKE” at top and “MHC 62” in base all in gold.

Dark blue and gold are the colors traditionally associated with the US Navy. The wavy border reflects the coastline or the littoral maritime areas of operation of the MHC. The mine highlights the ship’s mission; to search out and clear mines. The Shrike, an aggressive hunter, is the ship’s namesake. They are dashing and bold predators. The baton refers to Baton Rouge, site of the USS Shrike’s commissioning.

The star and annulet suggest accuracy commemorating the previous USS SHRIKE and underscore it’s mission; the operational testing and evaluation of new mines. The annulet or circle denotes unity and teamwork. It is red to denote zeal and courage. The pole star highlights the major cardinal directions and alludes to the USS Shrike’s far reaching scope and mission. The wave represents the Atlantic Fleet, the theater of operations of the past and present USS Shrikes.

Literature: Image from www.milart.com. Information from The Institute of Heraldry, US Army.