From Heraldry of the World
Your site history : Mongolia
Jump to navigation Jump to search

Mongolia is divided into 21 provinces (aimags), which are in turn divided into 329 districts (sums). The capital Ulaanbaatar is administrated separately as a capital city (municipality) with provincial status.

As far as I know, none of these actually uses a coat of arms. 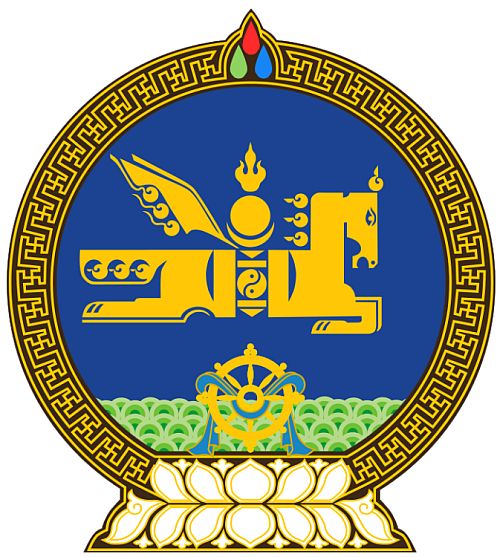 The outer rim features a tumen nasan, symbolizing eternity, surrounding a circular blue field, symbolizing the sky. On the centre of the field is a combination of the Soyombo symbol and the wind horse (treasured steed), symbolizing Mongolia's independence, sovereignty, and spirit. Sun, moon and fire symbols derived from Xiongnu.

Above the field is a Cintamani (Чандмань), representing the Buddhist Three Jewels, which in Mongolian folklore grants wishes. Below the central emblem is a green mountain range, with the Wheel of Dharma (Хүрд) at the center. On the bottom of the mountain range and wheel is a khadag (Хадаг), a ceremonial scarf.

From 1960 to 1991, the Mongolian People's Republic used an emblem with a very similar shape, but with several differing elements. Instead of the Wind Horse, a horseman on a normal horse is shown. In the background, the sun rises above mountains. The Buddhist symbols are replaced by symbols of Socialism. A gearwheel stands for industrialization, sheaves around the perimeter stand for the farming class, and the top featured a red star with the socialist version of the Soyombo. Along the bottom, a blue-red ribbon is placed in front of the gearwheel, with the letters БНМАУ, the abbreviation for Бүгд Найрамдах Монгол Ард Улс, (Mongolian People's Republic).

Before 1961, the emblem did not bear most of the socialist symbols. The horseman carried a long lasso pole and the heads of four types of herd animals were shown on the sides. A red ribbon at the bottom bore the name of the country in the traditional Mongolian alphabet between 1940 and 1941 with the Cyrillic abbreviation after that.