From Heraldry of the World
Your site history : Montgomeryshire
Jump to navigation Jump to search

County Council abolished 1974 and transformed into a District Council in Powys. Abolished 1996 and incorporated into Powys 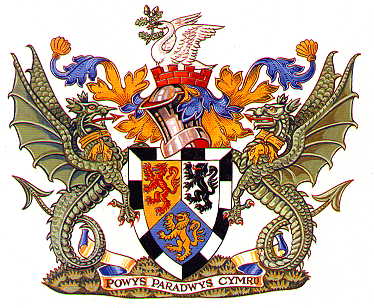 Arms : Tierced in pairle reversed Or, argent and azure, three lions rampant gules, sable and gold; all within a bordure gobony sable and argent.
Crest: Issuant from a mural crown gules, a swan rising, in the beak a sprig of oak slipped leaved and fructed proper. Mantled azure, doubled Or.
Supporters: On either side a wyvem vert gorged with a riband, pendent therefrom by a ring a fleece Or.
Motto: Powys Paradwys Cymru.

The two upper divisions represent the principalities of Powys Wenwynwyn and Powys Fadog, which in the Middle Ages covered largely what is now Montgomeryshire. The red lion on gold was the traditional arms of Gwenwynwyn and the black lion on white those of Madog, the two respective Princes descended from Bleddyn ap Cynfyn, last Prince of Powys. The gold lion on blue is from the arms of Roger de Montgomery, Earl of Shrewsbury, a leader of the Norman invasion of Wales, from whom the town and county take their name. The black and white border is derived from the colours of Brochwel Ysgithrog, a 7th century Prince of Powys famous for his resistance to the Saxons.

The red mural crown represents Powys Castle (Castell Coch - Red Castle) and the swan is for the beautiful waterways of the county, particularly the rivers Severn and Wye. The branch of oak recalls the former importance of Montgomeryshire oak to the Royal Navy.

The green wyverns derive from the crest of the Herberts, Earls of Powis and Montgomery. The golden fleeces hanging from their necks refer to the former woollen industry.

The motto is that long used in the county before the arms were granted.