From Heraldry of the World
Your site history : Mpumalanga
Jump to navigation Jump to search 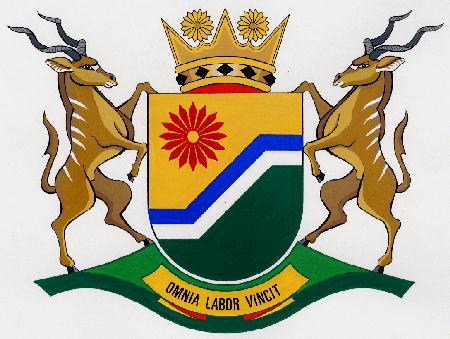 Arms: Per bend sinister, inclined in the flanks per fess, Or and Vert, surmounting the partition a bend sinister per bend sinister, all similarly inclined, Azure and Argent, in dexter chief a Barberton daisy Gules, seeded Or; the shield ensigned of a coronet comprising a circlet Or jewelled of lozenges sable and heightened of four rays alternating with as many Barberton daisies, Or.
Supporters: Two kudu antelope proper.
Motto: Omnia Labor Vincit

The Barberton Daisy alludes to the town of Barberton, the oldest town in the region. The main charge on the shield alludes to the fact that half of the region is on the Highveld (1500m above sea level) and half on the lowveld (less than 500m above sea level, some of which contains the Kruger Park). The region is bisected by a series of mountain faces.