From Heraldry of the World
Your site history : Mthatha
Jump to navigation Jump to search 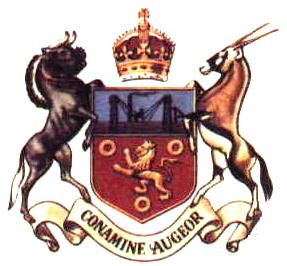 The arms appear to have been adopted during the 19th century, and it is surprising that neither the apartheid Republic of South Africa (1961) nor the Republic of Transkei (1976) made any attempt to change these arms, which reflect a brand of imperialism that appears to have been dominant among the white voters - officials, traders and farmers - who constituted the municipality of Umtata during the 1890s.

The chief illustrates industries not seen anywhere in Transkei - in fact, the "dark satanic mills" shown (to quote from the English poet and visionary William Blake) are those of the Witwatersrand. Their significance appears to be that Umtata was a major centre for recruiting labour for the Witwatersrand and other centres of mining activity, chiefly on the Highveld.

Nothing in the rest of the arms reflects anything of the Mthatha valley either: the rest of the shield, and the supporters, too, are borrowed directly from the arms of the Cape Colony, and have no special significance to the town.The crown illustrated is the Tudor crown, used as a symbol of the British sovereign until the mid-20th century, when it was replaced by St Edward's crown in most representations (such as colonial flags), but appears to have remained unaltered in the arms of Umtata.