From Heraldry of the World
Your site history : Munkedal
Jump to navigation Jump to search 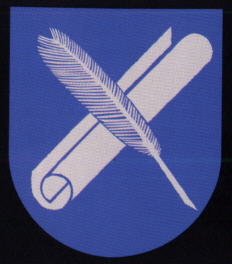 After the merger the new municipality wanted to have a monk (Munke) in its arms, but that was not accepted. It was finally decided to use two main attributes of monks, a piece of paper and a quill in the arms. These symbols also refer to the importance of paper factories in the municipality.