From Heraldry of the World
Your site history : Murgon
Jump to navigation Jump to search 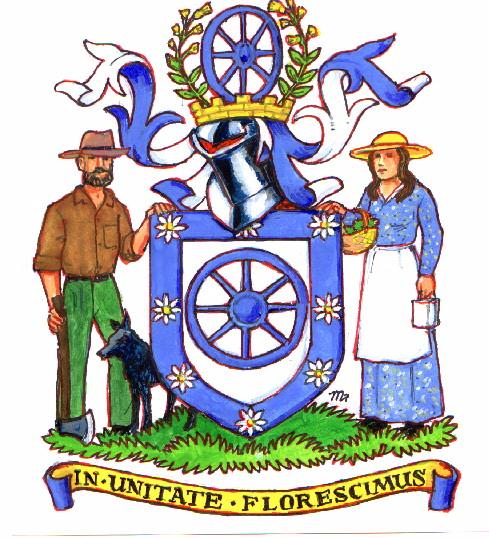 The blue wagon wheel is a well-known symbol of Murgon, also recalling its slogan as 'the Hub of the South Burnett'. Hence it appears as the main charge, in the crest and the badge. The name of the town derives from an Aboriginal word for 'a pond covered with lilies', depicted in the blue bordure strewn with water lily flowers. In the crest the mural crown alludes to a civic authority, while the branches celebrate one of the district's unique products - the Buboisia being grown for extraction of Atropine for medical purposes.

The original design was altered slightly by the Richmond Herald, replacing as supporter two bearded Aboriginal men in a squatting position with the European pioneer settlers. The man is accompanied by a famous Queensland Blue-Heeler cattle dog, so named for its techniqhe of nipping the heels of wandering members of the herd.

The motto was suggested by the designer and can relate to the lily and Duboisia flowers (floresco) and the wheel (a symbol of unity).