From Heraldry of the World
Your site history : Natal Colony
Jump to navigation Jump to search 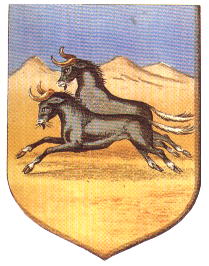 The first European settlement in Natal dates from 1824 when the British established Fort Natal. It became part of the Cape Colony and in 1824 it became a separate colony. In 1839 Boers who left the Cape Colony forced the British out and established the Republic Natalia, which was an independent republic until 1842. It had no arms.

In 1842 the British conquered Natalia and Natal became again a British colony in 1843. This lasted until 1845 when Natal again became part of the Cape colony. Finally, in 1856 Natal became a separate colony again and remained so until 1910.

In 1861 the wildebeest (gnu) was chosen as the symbol of the colony and two wildebeest appear on the seal of Natal in 1869. The colony did not use arms until 16 May 1907 when the two wildebeest from the seal were placed separately in a shield.

The arms were granted without crown, crest or supporters, but in practice often a crown and the motto 'Natal' was used.