From Heraldry of the World
Your site history : National Arms of Australia
Jump to navigation Jump to search

National Coat of arms of AUSTRALIA 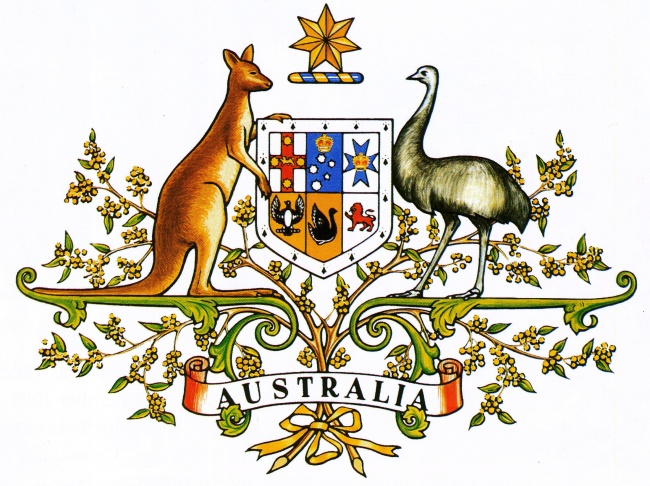 Quarterly of six, the first quarter Argent a Cross Gules charged with a Lion passant guardant between on each limb a Mullet of eight points Or; the second Azure five Mullets, one of eight, two of seven, one of six and one of five points of the first (representing the Constellation of the Southern Cross) ensigned with an Imperial Crown proper; the third of the first a Maltese Cross of the fourth, surmounted by a like Imperial Crown; the fourth of the third, on a Perch wreathed Vert and Gules an Australian Piping Shrike displayed also proper; the fifth also Or a Swan naiant to the sinister Sable; the last of the first, a Lion passant of the second, the whole within a Bordure Ermine; for the Crest on a Wreath Or and Azure A Seven-pointed Star Or, and for Supporters dexter a Kangaroo, sinister an Emu, both proper.

The arms of Australia combine the badges of the six Australian states : New South Wales, Victoria, Queensland, South Australia, Western Australia and Tasmania. On top of the arms is a seven pointed star, which symbolises the unity between the six original colonies (now States) and the Territories (Australian Capital Territory and the Northern Territory). The kangaroo and emu are the most well known typical Australian animals. They were also chosen as neither can walk backwards. The plant is the golden wattle (Acacia pycnantha), the national flower of Australia.

Below another version of the arms. As the scroll and wattle are not an official part of the blazon, the rendering below is still correct. 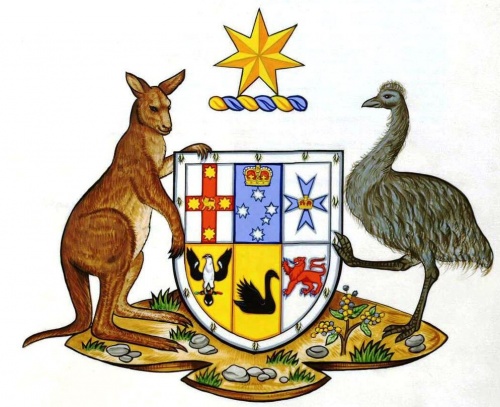 The first arms of the Commonwealth of Australia were granted 4 years earlier on May 7, 1908. 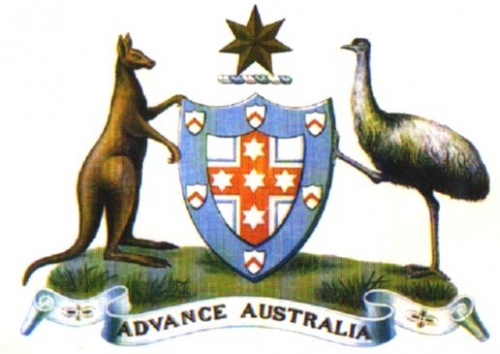 These arms showed the Cross of St. George with two small bluelines and a bordure with 6 shields, each representing one of the Australian States.

The motto was Advance Australia and the emu and kangaroo supporters were introducced.

When the arms were redesigned in 1911 to better identify the individual States, William Kelly ( a member of the Austrlaian parliament) is quoted to have said :
"The emu and kangaroo are so built that they hardly fit into the heraldic atmosphere, and I think we make ourselves ridiculous when we endeavour to carry on the traditions of the Old World with some of the wild creations of our Australian fauna."

Both animals, however, were retained in the arms and have late rbeen used in many more Australian arms as supporters.

The 1912 coat of arms removed the bed of grass that was beneath the shield and changed the scroll to read simply "Australia". The colours in the wreath were also changed from blue and white to blue and gold. A background of two sprays of Golden Wattle was added.

The oldest Australian arms known are shown below: 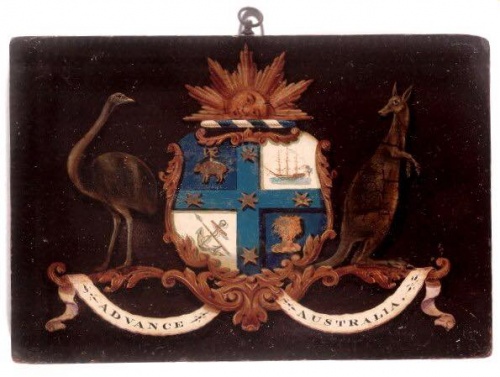 This is the oldest known example of the 'Advance Australia' arms. The 'Advance Australia Arms' (named because of the motto inscription) became widely used in the Australian colonies by private corporations and individuals. Although they never had any official status, they formed the basis for several official coats of arms. This representation was reputedly painted for Thomas Silk, the son of the Captain of the Prince of Orange, a convict ship that visited Sydney in 1821.

Why such a representation of the Advance Australia Arms should have been made to Captain Silk at this time is not clear. The artist who painted this representation is not known, although the style of application of paint onto the panel is reminiscent of coach painting. The reverse of the panel appears to have been prepared as a cribbage board.

The achievement can be blasoned as follows: