From Heraldry of the World
Your site history : National Arms of Canada
Jump to navigation Jump to search

THE NATIONAL ARMS OF CANADA 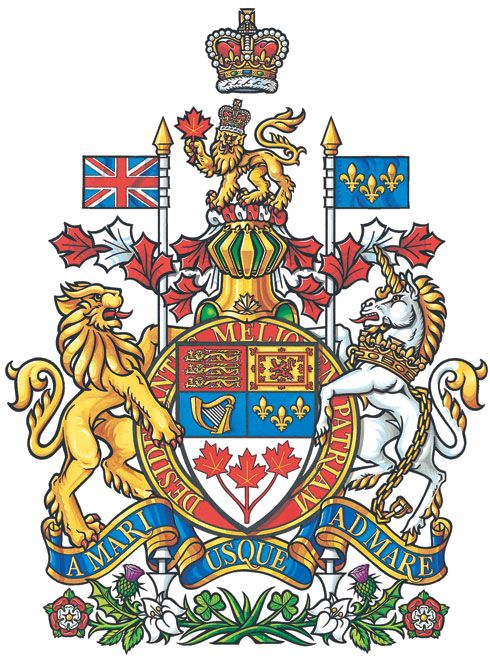 Tierced in fesse the first and second divisions containing the quarterly coat following, namely, 1st. Gules three lions passant guardant in pale or, 2nd, Or a lion rampant within a double tressure flory-counter-flory gules, 3rd, Azure a harp or stringed argent, 4th, Azure three fleurs-de-lis or, and the third division Argent three maple leaves conjoined on one stem proper. And upon a Royal helmet mantled argent doubled gules the Crest, that is to say, On a wreath of the colours argent and gules a lion passant guardant or imperially crowned proper and holding in the dexter paw a maple leaf gules. And for supporters On the dexter a lion rampant or holding a lance argent, point or, flying therefrom to the dexter the Union Flag, and on the sinister a unicorn argent armed crined and unguled or, gorged with a coronet composed of crosses-patee and fleurs-de-lis, a chain affixed thereto, reflexed of the last, and holding a like lance flying therefrom to the sinister a banner azure charged with three fleurs-de-lis or; the whole ensigned with the Imperial Crown proper and below the" shield upon a wreath composed of roses, thistles, shamrocks and lilies a scroll azure inscribed with the motto - A mari usque ad mare.

Arms : Tierced in fess, the first and second divisions containing the quarterly coat following, namely, 1st Gules three lions passant guardant in pale Or, 2nd, Or a lion rampant within a double tressure flory-counter-flory Gules, 3rd, Azure a harp Or stringed Argent, 4th, Azure three fleurs-de-lis Or, and the third division being Argent three maple leaves conjoined on one stem proper; An annulus surrounds the shield, being Gules edged and inscribed in letters Or with the Motto of the Order of Canada, DESIDERANTES MELIOREM PATRIAM, meaning “They desire a better country”; The Royal Crown proper ensigns the full achievement of the Arms.
Crest: On a wreath Argent and Gules, a lion passant guardant Or imperially crowned proper and holding in the dexter paw a maple leaf Gules.
Supporters: Dexter a lion Or holding a lance Argent, point Or, flying therefrom to the dexter the Royal Union Flag, sinister a unicorn Argent armed, crined and unguled Or, gorged with a coronet composed of crosses-patée and fleurs-de-lis a chain affixed thereto and reflexed Or, holding a like lance flying therefrom to the sinister a banner Azure charged with three fleurs-de-lis Or; The supporters stand on a scroll Azure inscribed with the Motto in letters Or, above a wreath of roses, thistles, shamrocks and lilies proper.
Motto: A MARI USQUE AD MARE

During the first decades after Confederation, questions relating to the Arms of Canada had not received the attention they deserved. The Royal Arms of the United Kingdom were then freely used to identify the offices of the Government of Canada.

The first arms were granted on May 26, 1868. This design displayed, quarterly, the arms of the original four provinces of the new federation: Ontario, Quebec, Nova Scotia and New Brunswick. It was never used as the Great Seal, but was gradually adopted as the Arms of Canada. For a reason unexplained by history, another Great Seal was adopted for Canada representing Queen Victoria and the throne of her coronation; this Great Seal is however altered at the beginning of each reign, so as to show the effigy of the Sovereign.

When other provinces joined Confederation, the attempt to add the arms of the new provinces to this federal composite design resulted in a crowded and confused appearance, see below.

In 1888, the journal The Dominion Illustrated, proposed new arms (mainly to be used on their own journal) for the country, independent of new provinces being added. The arms showed a quartered field with the symbols of England (rose), France (fleur-de-lys), Ireland (shamrock) and Scotland (thistle), with a beaver as crest and surrounded by maple leaves. The whole under a Royal crown and with the motto Diversae conjunctae crescimus. See image below.

In 1920 the Canadian Government submitted a request to the Sovereign for a grant of arms. This request was approved and the arms assigned to Canada were granted by His Majesty King George V dated November 21, 1921.

The first quarter consists of the three gold lions of England walking and shown full face, on a red background.
The second quarter consists of the arms of Scotland, being a red lion rearing on the left hind foot, within a red double border with fleurs-de-lis, on a gold background. The royal lion of Scotland was probably first used by King William, who was known as "the lion". However it was certainly used by his son, Alexander III, who made Scotland an independent nation.
The third quarter is a gold harp with silver strings, on a blue background, the arms of Ireland. North of the present city of Dublin, there is a hill called Tara which for centuries was the religious and cultural capital of ancient Ireland. If you visit the site, you will see a 750 foot earthenwork that is said to have been the site of the banqueting hall of Irish kings. There is a legend, recorded in C.W. Scott-Giles monumental work The "Romance of Heraldry", that this harp was found and came into the possession of the pope. In the 16th century, Henry VIII suppressed the Irish people in his attempt to become the lawful successor to the kings of ancient Ireland. The pope sent the harp of Tara to England whereupon Henry added its likeness to his royal shield. From this time it has remained a symbol of Ireland.
The fourth quarter depicts three gold fleurs-de-lis, on a blue background, the old arms of France. The fleurs-de-lis was the first heraldic emblem raised in Canada. On July 24, 1534, Jacques Cartier landed at Gaspé and erected a cross, affixed with the symbol of his sovereign and the royal house of France.

To complete the design of the shield, a Canadian symbol was required. Three red maple leaves conjoined on one stem, on a silver or white background, were then added. Throughout the 19th century, the maple leaf had gradually become closely identified with Canada. The maple leaf had been worn as a symbol of Canada during the visit of the Prince of Wales in 1860. The song "The Maple Leaf Forever", written by the Toronto school teacher Alexander Muir in 1868 had become Canada's national song. During World War I, the maple leaf was incorporated into the badge of every Canadian regiment. It was most appropriate that three maple leaves were given a commanding position within the shield, which made it unmistakably "Canadian".

When designing the arms, some wanted green maple leaves in base to symbolise a young country, while others wanted red maple leaves for esthetic reasons, and because red was already being identified as a national colour. So the College of Arms blazoned the leaves "proper" (maple leaves can properly be depicted as green, red, or gold or other variations), thus leaving it up to the user to determine . Some early uses of these arms do emblazon the leaves as green, but red has become the normal way of depicting them.

On July 12, 1994 the arms were augmented with a ribbon with the motto of the Order of Canada: "Desiderantes Meliorem Patriam" (They desire a better country).

The Arms of Canada show a royal helmet, which is a barred helm of gold looking outward and draped in a mantle of white and red which are the official colours of Canada.

The supporters are derived from the arms of England (lion) and Scotland (unicorn) When James VI of Scotland became James I of England in 1603, he chose one lion and one unicorn as the supporters of his royal shields. Canada adopted the same pattern and used a lion on the shield's right holding a gold pointed silver lance from which flies the Royal Union flag, and a unicorn with gold horn, mane and hoofs, on the shield's left. Around its neck is a gold and chained coronet of crosses and fleurs-de-lis. The unicorn holds a lance flying a banner of royalist France, namely three gold fleurs-de-lis, on a blue background. The two banners represent the two principal founding nations that had established Canada's enduring laws and customs.

Canada's motto "A Mari usque ad Mare" is based on biblical scripture: "He shall have dominion from sea to sea and from the river unto the ends of the earth" (Psalm 72:8). The first official use of this motto came in 1906 when it was engraved on the head of the mace of the Legislative Assembly of the new Province of Saskatchewan. The wording of the motto came to the attention of Sir Joseph Pope, then Under Secretary of State, who was impressed with its meaning.

At the base of Canada's Royal Arms are the four founding nations of Canada; the English rose, the Scottish thistle, the Irish Shamrock and the French fleur-de-lis.
The rose first became the symbol of England when Henry III married Eleanor of Provence and the golden rose of Provence became England's new floral symbol. From this golden rose eventually came the red rose of the House of Lancaster and the white rose of the House of York. There is a legend that, in 1010 when they attempted to capture Scotland, the Danes landed secretly at night. As they approached Stains Castle they removed their shoes to avoid making any noise. When they reached the castle's moat, they jumped in not realizing that the moat was dry and overgrown with thistles. The screams of the bare-footed Danes roused the garrison. The castle and Scotland were both saved and, according to legend, it is in memory of that night that the thistle became the floral emblem of Scotland. In Irish legends, it is said that when he brought Christianity to Ireland, Saint Patrick used the three petals of the shamrock to illustrate the Holy Trinity. As a result, the shamrock became the floral emblem of Christian Ireland.

Following its adoption as the symbol of France's king, the fleurs-de-lis also became the symbol of Christian France. By the 13th and 14th century, the three petals of the lily of France were being described by writers as symbols of faith, wisdom and chivalry. As in Ireland, they also came to be seen as symbols of the Holy Trinity.

On top of the "achievement of the Arms of Canada" is the Imperial Crown which is indicative of the presence of a monarch as Canada's Head of State.

Literature : Image and information from http://infoservice.gc.ca