From Heraldry of the World
Your site history : National Arms of China
Jump to navigation Jump to search 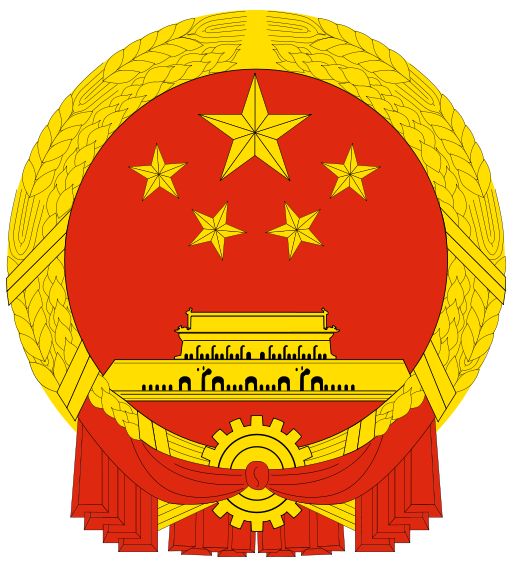 China does not use a heraldic national symbol, but the above emblem.

The national emblem of China was officially adopted on September 20, 1950.

The arms show a red disc with a representation below of the Tiananmen, the entrance gate of the Forbidden City as seen from the Tiananmen Square in Beijing and five stars above. The outer border is composed of sheaves of wheat and the inner border of sheaves of rice, with a cog-wheel at the center of the bottom portion of the border.

These elements taken together symbolise the revolutionary struggles of the Chinese people since the May Fourth Movement and the coalition of the proletariat which succeeded in founding the People's Republic of China.

Before this symbol was approved a number of proposals were received :

Proposals by the China Central Academy of Fine Arts (source): 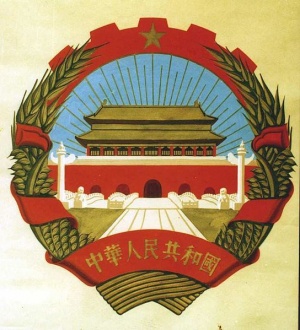 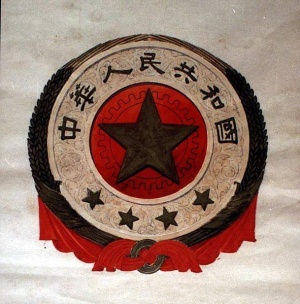 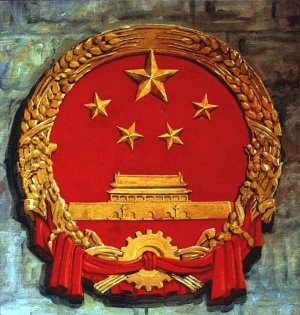 Historically China also did not use heraldic arms. Until 1913 the Imperial Dragon was used as the official national symbol.

The Twelve Symbols national emblem (Chinese: 十二章國徽) was the state emblem of the Empire of China (1915–16) and the Republic of China from 1913-1928. It is based on the ancient Chinese symbols of the Twelve Ornaments. 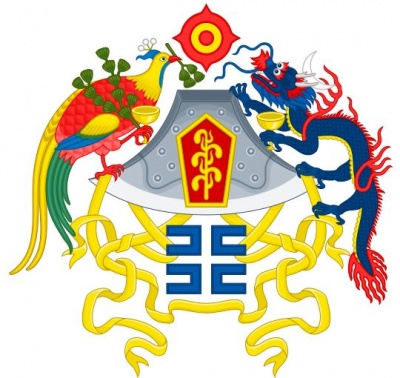 These are first mentioned as already ancient in the Book of Documents by Emperor Shun, who was one of the legendary Three Sovereigns and Five Emperors. Oral tradition holds that he lived sometime between 2294 and 2184 BCE. According to the book, the emperor wished for the symbols to be used on official robes of the state.

The symbols were considered most auspicious and therefore as a set were reserved only for the emperor to be shown on his ceremonial robes.

The dragon and phoenix supporters represent the natural world. In yin and yang terminology, a dragon is male yang and the phoenix a female yin. Therefore, the emperor was often identified as the dragon, while the empress was the phoenix.

The dragon, symbolizes strength and adaptability and was used as the National Symbol during the preceding Qing dynasty.
On the back of the dragon is fire, which symbolises light and brightness.
Behind the head of the dragon is the crescent moon of the moon rabbit who is constantly pounding the elixir of life.
The supporter dexter is a fenghuang, or pheasant-phoenix, and represents peace and refinement.
The phoenix holds pondweed in its right talon, a symbol of purity and brightness.
Behind its head are three stars, which could be the Fu Lu Shou stars, which symbolise happiness, prosperity and longevity.
Both creatures hold in one of each claws the zongyi (Chinese: 宗彝), which is a sacrificial cup, symbolising devotion and loyalty.
On top is an abstract symbol of the sun of the three-legged crow.
In the middle is the axe head, which symbolises courage and resolution, but also executive justice.
Overlaid on the axe head are grains of rice, which symbolise nourishment and the country's agriculture. In the center of the axe head framed by a pentagon is a simplified symbol of a rice ear, which again stresses the importance of agriculture as the basis of the country's wealth and prosperity. The shape on the emblem is based on a carved stone dating to the Han dynasty.
The downward-pointing blade of the axe head features a hardened edge in shape of the four sacred mountains. These represent tranquility and steadiness. The fifth Center Great Mountain is represented by the axe head.

The mountains represent earth, the cups metal, the pondweed water, the rice grains wood, and fire, which are all representations of wu xing.

The figure 亞 fu underneath the axe represents two animals with their backside together. This symbolises the capability to make a clear distinction between right and wrong. The fu sign is in the middle of complex interlacing ribbons, which connect the dragon, the phoenix and the axe to each other. The ribbons could symbolise Great Unity and Harmonious Society.

From the late 19th century onwards until 1950, most often the Imperial Dragon has been placed on a shield to create European-style heraldic arms in Western collector's items or books, even after the introduction of the Twelve symbols emblem. Some examples are shown below: