From Heraldry of the World
Your site history : National Arms of Denmark
Jump to navigation Jump to search 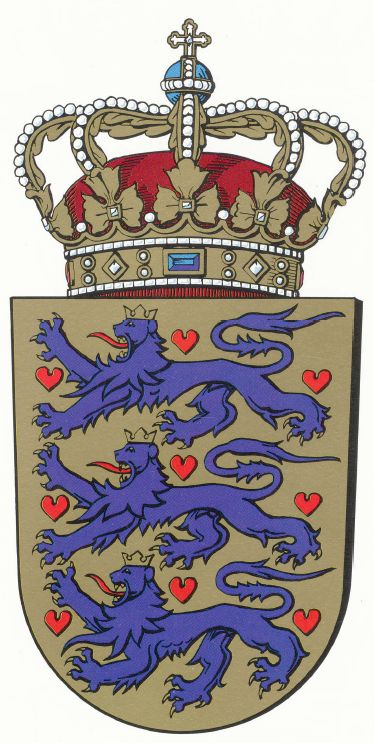 The arms above are the arms of Denmark proper. The lions as the arms for Denmark are known since the early 12th century. These are the arms that are commonly used by all State institutions. The parliament also uses the arms, but without the crown. The Danish arms are first seen on the seal of King Knud, on his seal from 1190, and were his personal arms. The arms are probably a bit older, as they were also used by his brother and successor Valdemar. It is thus likely that the arms were also used by their father King Valdemar the great (1157-1182).

The lions may be derived from the arms of Slesvig, but that can not be ascertained. The meaning of the lions hence is unknown. The lions were not crowned until the middle of the 13th century. The number of hearts, which were often described as water-lily leaves, differed widely during the centuries, but were fixed at nine in 1819.

The great arms of Denmark are the same as the arms of the ruling King or Queen and may be used by the Royal family and the Government, as well as by anyone with special permission from the Queen. In practice, the great arms are not used by the government, except at special occasions.

The great arms were officially adopted on 16-11-1972 in their present form.

The arms are quartered, over which is placed a cross derived from the national flag, the Dannebrog. Above all is placed the arms o fOldenburg. The royal family descends from the Dukes of Oldenburg.The first and fourth quarter show the arms of Denmark proper. The second quarter shows the two lions of Slesvig. The duchy of Slesvig lies on the border of Denmark and Germany. The Danish kings originated from Slesvig. The third quarter shows three crowns, which originally symbolised the three Kingdoms united in the Kalmar Union: Denmark, Sweden and Norway. Below the crowns are the symbols of Greenland (polar bear) and Faroe Islands (sheep). The arms of Greenland are shown wrongly, see under Greenland.

Below the shield is placed the chain of the Order of the Elephant, one of the most noble European orders.

The great arms change at each new ruling dynasty or with each new King or Queen. The arms of Denmark proper do not change.