From Heraldry of the World
Your site history : National Arms of Greece
Jump to navigation Jump to search 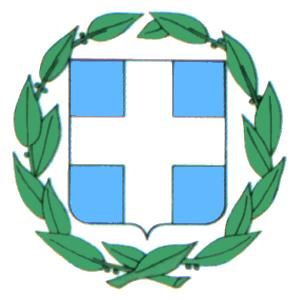 The National arms of Greece were adopted on June 7, 1975.

The arms show a white cross on blue, which has been used since 1833 in different variations. The arms are surrounded by a wreath of laurel leaves. The constitution describes no colours of the wreath, indicating a 'proper' colour, i.e. green. In practice the government uses a monochrome blue version for official use, and with golden leaves for military use.

The first Greek coat of arms was introduced during the reign of King Otto. The arms were based on the arms of the Kingdom of Bavaria, as the King was related to the Bavarian Kings of the House of Wittelsbach.

The arms show the silver cross and the arms of the Wittelsbach dynasty as an escutcheon. The shield was supported by two crowned lions and surmounted by the royal crown. 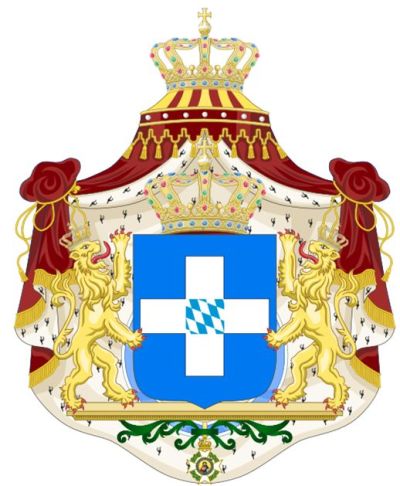 These arms were abolished upon the king's exile exile in 1862.

As small arms, only the cross was used, for example on coins. 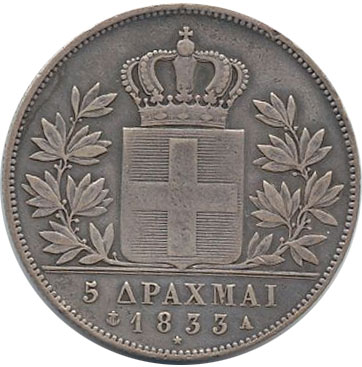 In 1864 a Danish prince was chosen as King George I. The new royal and national arms were based on the old design, but now with the arms of Schleswig-Holstein-Sonderburg-Glücksburg as an escutcheon. The lions were replaced by two male figures, alluding to the legendary Heracles. The chain of the Order of the Redeemer was also added. The motto of the dynasty (Ἰσχύς μου ἡ ἀγάπη τοῦ λαοῦ, People's love, my strength), was also introduced.

At the same time a simplified version for the government was introduced, without the royal escutcheon. Ever since Greece has been a monarchy there have been a Royal Coat of Arms and a National Coat of arms.

The arms as shown in heraldry books showing 'the arms of all countries in the world':

When Greece became a republic in 1924, all external ornamentation was discarded and only the shield with the cross was used. 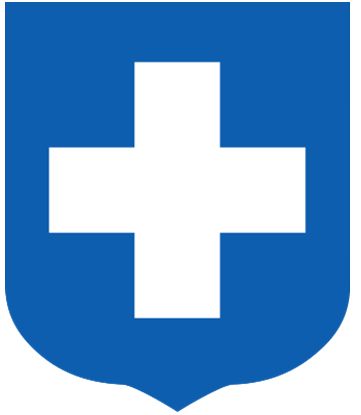 In 1935 the monarchy was restored, as were the old Royal and State arms from 1864. The Royal version is still used by the current Greek royal family - pretenders to the throne of Greece.

During these two years the military junta used a phoenix as a symbol, without any shield.

The arms have been shown on a large number of collector's items from all over the world. Not always in the correct version or with the correct escutcheon.

Literature: Most images and information obtained from Wikipedia