From Heraldry of the World
Your site history : National Arms of Mozambique
Jump to navigation Jump to search 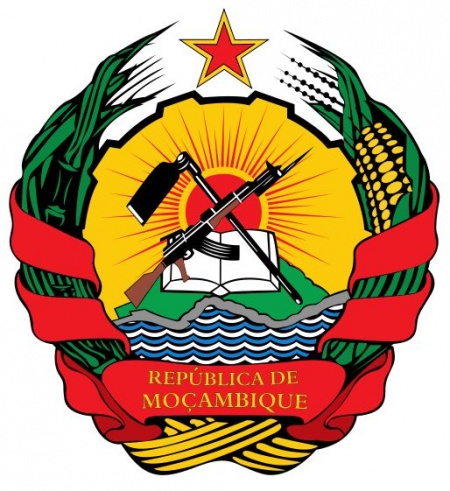 The national emblem of Mozambique was adopted in 1975 and again in 1990. The difference is the removal of the word 'Popular' in the official name of the country.

The emblem shows a gear wheel, bordered by corn stalks and sugarcane. In the middle there is a red sun over a map of Mozambique in green, and blue waves, an AK-47 gun crossed with a hoe, and a book. The wreath is tied with a ribbon bearing the name of the country.

In June 1932 the first arms for the Portuguese colony of Mozambique were designed and proposed to the Ministry of Colonies. The arms follow a centralised pattern with a bordure with the castle of Portugal and a cross as used by the Portuguese discoverers. For each province a separate symbol was used as the main charge. For Mozambique a globe was chosen. The reason thereof is not known. These arms were, as far as I know, never officially adopted and replaced in 1935. A similar design was used with the globe, see below. Although these arms were officially used, I have no idea whether they were actually granted.


When in 1951 the colony was transformed into a province, the text on the banner was changed. The arms were abandoned at the independence in 1975.