National Arms of the Philippines

From Heraldry of the World
Your site history : National Arms of the Philippines
Jump to navigation Jump to search

National Coat of arms of PHILIPPINES 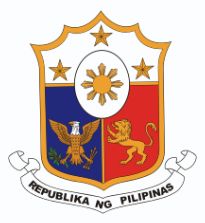 Paleways of two pieces, azure and gules; a chief argent studded with three mullets equidistant from each other; and, in point of honor, ovoid argent over all the sun rayonnant with eight minor and lesser rays. Beneath shall be the scroll with the words "REPUBLIKA NG PILIPINAS," inscribed thereon.

The 3 stars represent the three major island groups namely, Luzon, Visayas and Mindanao, whereas the 8 rays of the sun represent the first 8 provinces (Batangas, Bulacan, Cavite, Manila, Laguna, Nueva Ecija, Pampanga and Tarlac) that openly revolted against Spain in the late 1800s.

The Philippines were a Spanish colony, which had no own arms, but used the arms of the Spanish East Indies. The first real arms were designed in the early 1900s under American rule. The new arms were base don the shield of the United States bearing the arms of the city of Manilla. As a crest the American eagle was used. Beneath the shield was the scroll with the words Philippine Islands. It remained unaltered until the inauguration of Commonwealth of the Philippines in 1935.

During the Commonwealth Era, the arms were chaned in 1935. The number of stripes reduced from thirteen to two and the silver chief with three five-pointed stars were added. The eagle crest remained but was was slightly enlarged. The arms of manilla were retained, but the name on the scroll was changed to Commonwealth of the Philippines.

After the war, President Sergio Osmeña reactivated the Philippine Heraldic Committee. They revised the arms by removing the crest and adding the symbols of Spain and the US on the shield. This design was approved by the Congress of the Philippines on July 3, 1946.

During the administration of President Ferdinand Marcos, the name of the country was was replaced by the motto "Isang Bansa, Isang Diwa" (One Nation, One Spirit). It was approved by the Office of the President on July 31, 1978. However, during the administration of Corazon Aquino, the motto was replaced with a Filipino translation of the original words, Republika ng Pilipinas, which was approved on February 12, 1998.