From Heraldry of the World
Your site history : National Emblem of Brazil
Jump to navigation Jump to search

National Arms and Emblem of Brazil 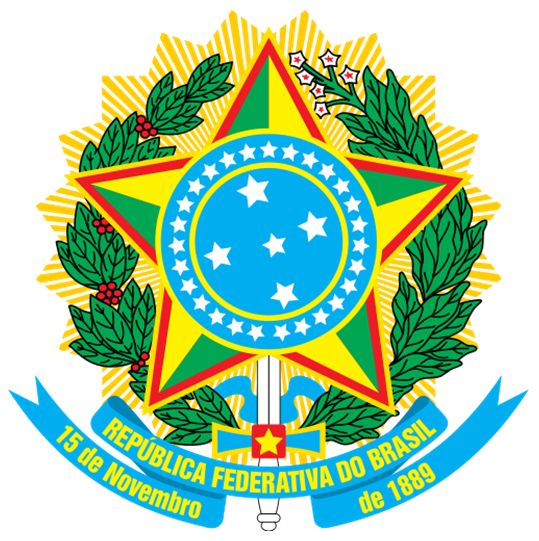 Brazil does not use a proper coat-of-arms, but the above emblem or logo.

It shows the Southern Cross in a blue circle. The ring of 27 stars around it represents Brazil's 26 states and the Federal District.

The whole is placed on a star and surrounded by coffee (at the left) and tobacco (at the right) branches, which are important crops in Brazil.

The blue ribbon contains the official name of Brazil (República Federativa do Brasil — Federative Republic of Brazil) in its first line. In the second line, the date of the federative republic's establishment (November 15, 1889) is written.

The arms showed a gold armillary sphere (taken from the Portuguese arms) superimposed on a cross of the Order of Christ, the sphere encircled by 19 silver stars (one for each state) on a blue circle; an imperial crown with diamonds set atop the shield, the whole surrounded by two plants of coffee and tobacco.

On 12 October 1822 when the newly independent country was declared an Empire and Prince Pedro became the country's first emperor, the coat of arms became known as the Imperial Coat of Arms.[2] 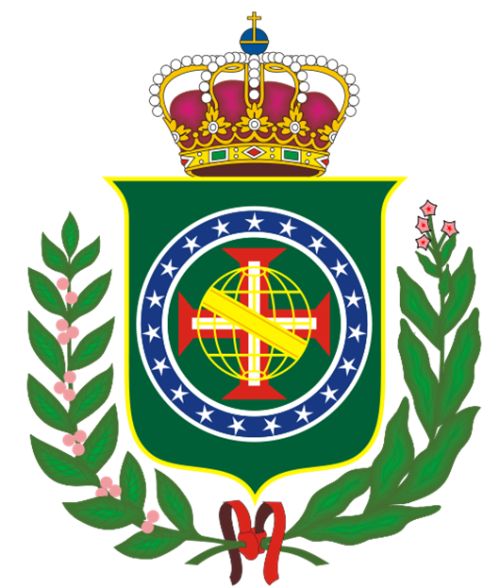 These arms lasted only one month, as on October 12, 1822 a new crown was added, based on the newly made Imperial Crown. On July 18, 1840 a new crown was made for the new Emperor, Pedro II, and thus the arms were changed again. Similarly, new large arms were designed, with the Order of the Southern Cross, the Sceptre and Hand of Justice crossed behind the shield, and the cloth of estate surmounted by a second Crown.

Brazil was established as a Portugese colony around 1500. The colony did not use official arms, but on its seals a tree with a black cross was used. These were seen as unofficial arms until 1815.

From 1816-1821 Brazil was part of the United Kingdom of Portugal, Brazil and Algarves and thus used the arms of that Kingdom, see image below.