From Heraldry of the World
Your site history : National arms of Kenya
Jump to navigation Jump to search

THE NATIONAL ARMS OF KENYA 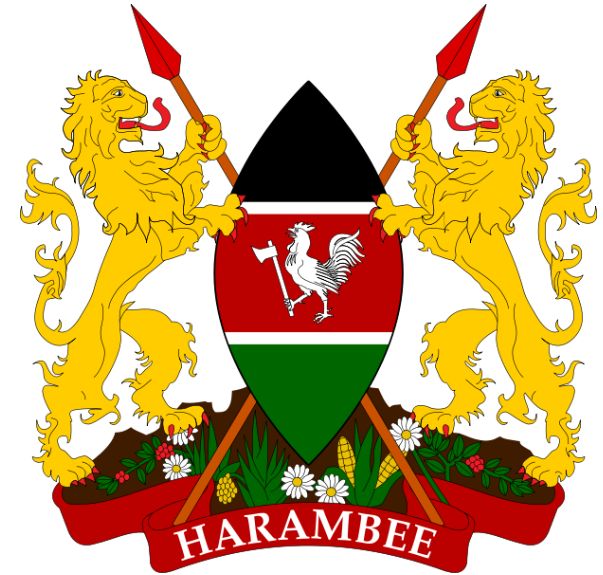 Arms: Per fees sable and vert, on a fess gules fimbriated argent a cock grasping in the dexter claw an axle also argent.
Supporters: On either side a lion or, grasping in the interior forepaw a spear of estate, the hafts of the spears crossed in saltire behind the shield.
Compartment: Mount Kenya proper containing in the foreground examples of Kenya agricultural produce – coffee, pyrethrum, sisal, tea, maize and pineapples.
Motto: Harambee

The shape of the shield and spears are those used by the Masaii tribe. Harambee is the motto of the chief political party KANU (Kenya Afrikan National Union) and means "all pull together". It was used by the first President Jomo Kenyatta to try to turn 50-60 disparate tribes into one nation at independence.

The chicken is the symbol of the KANU party.The shield colours represent the struggle for independence - green is the earth, red is the blood of the Mau Mau warriers for independence and black the rich soils. The lions are obviously a key animal in Kenya's wildlife parks.