From Heraldry of the World
Your site history : Neath RDC
Jump to navigation Jump to search 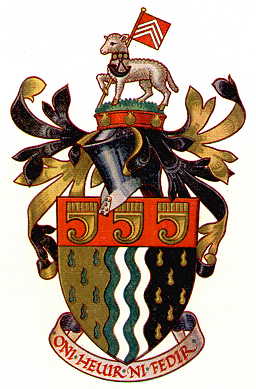 The four alternate green and white wavy lines symbolise the white rivers and green valleys of the district. The gold field to the left is the the colour of ripe corn, representing agriculture. The seven drops of oil, symbolising the importance of the oil industry, and also reflecting the colours of BP Llandarcy which sponsored the Grant of Arms. The black field represents coal-mining with seven golden droplets, representing the smelting industries. Together the fourteen droplets represent the fourteen parishes which made up the Rural District.

The wreath and mantling are in the two principal colours of the shield. The red band with three gold scallop shells echoes the collars worn by the supporters of the Earl of Jersey's arms.

The lamb is the emblem of both the Williams family of Aberpergwm and the Llewellyn family of Ynysygerwn, later Penllergaer. The lamb wears a black collar with three gold roundels, derived from the arms of the Tennant family of Cadoxton, and the black hunting-horn is the symbol of the Vaughan family of Rheola. Finally the banner shows the arms of Iestyn ap Gwrgan, the warlike ancestor of both the Llewellyn and Williams families.