From Heraldry of the World
Your site history : Neath and Port Talbot
Jump to navigation Jump to search 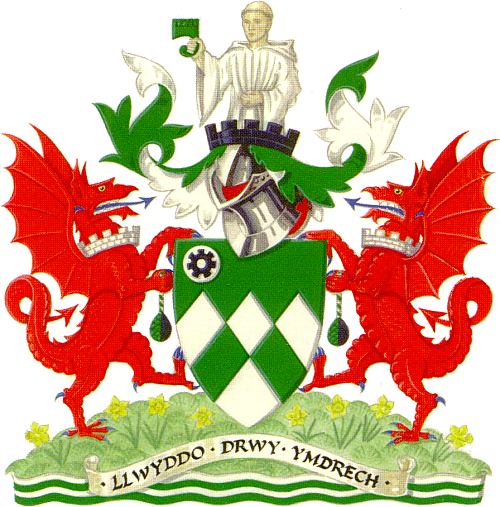 The silver roundel charged with a black cogwheel uses the colours of the arms of the former Neath. The black relates to the coal, oil and manufacturing industries and the silver to metal industries.
Cogwheels featured in the crests of the former West Glamorgan and in the former Lliw Valley.

The demi Cistercian monk in the crest refers to the Cistercian Abbeys of Neath and Margam and it formed part of the crest of Neath. The monk emerges from a black mural crown as in the crest of the former Lliw Valley. The crown is also a reference to the black and white towers in the Arms of the former Neath. The monk holds a clarion, an emblem said to have been used as a punning Badge by the Clare family. Three clarions were used on early seals by the Abbeys of Margam and Neath. The origins of this heraldic emblem are obscure but it may possibly represent a portable organ and in modern times it has certainly been used as a symbol of music.
It represents not only the Clare family but the importance of music locally and throughout Wales. It appears prominently in the Arms and Crest of the former Port Talbot, but the musical allusion is made in the Neath Arms by a harp.

The motto at the base of the Arms is in the Welsh language, and reads LLWYDDO DRWY YMDRECH. This, translated into English is SUCCEEDING THROUGH ENDEAVOUR.