From Heraldry of the World
Your site history : New Windsor
Jump to navigation Jump to search

Incorporated into : 1974 Windsor and Maidenhead 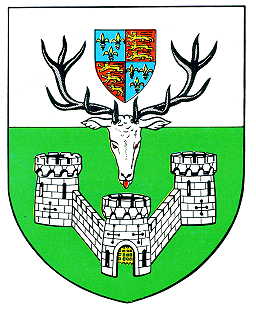 Per fesse Argent and Vert a Stag's Head caboshed of the first in chief between the attires Sable an Escutcheon of France Modern and England quarterly in base a Castle Wall with three Towers also Argent in the central tower a open Port with Portcullis raised Or.

The castle is, of course, a reference to Windsor's famous royal fortress, and the stag's head recalls that the Windsor Great Park around the town formed a hunting ground for the Norman kings. The shield depicts the old 1405-1603 Royal Arms and is appropriate as New Windsor is a Royal Borough.