From Heraldry of the World
Your site history : Newark
Jump to navigation Jump to search

The present council dos not use arms. 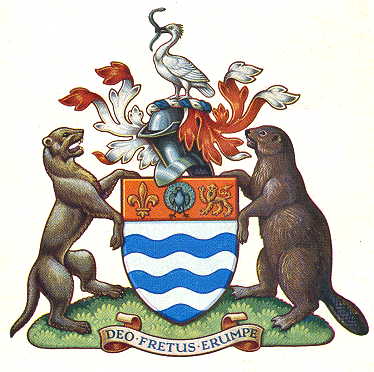 Arms : Barry wavy of six Argent and Azure on a Chief Gules a Peacock in his pride proper between a Fleur-de-Lis on the dexter and a Lion passant guardant on the sinister Or.
Crest : On a Wreath Argent and Azure a Morfex Argent beaked Sable holding in its beak an Eel proper; Mantled Gules doubled Argent.
Supporters : On the dexter side an Otter and on the sinister side a Beaver the latter langued Gules.
Motto: 'DEO FRETUS ERUMPE' - Trust God, and sally.

The wavy bars, crest, and supporters (an otter and a beaver) refer to Newark's riverside position. The fleur-de-lis and lion are royal emblems. Local opinion takes the bird as the symbol of pride.

The granting of a crest was one of the first grants made to a civic body, the first being that made to the borough of Ipswich on 29 August 1561. Several variations of the crest have been quoted. The original grant describes the bird as a morfex holding an eel.

It raises the interesting question of what type of bird a morfex is. It is not a latin term, nor a name for an heraldic creature; it does not feature in contemporary word-lists or vocabulary, and appears in no other grants of arms. The nearest possible equivalent is the ‘morfer’, included in the Oxford English Dictionary as a dialectal and obsolete word, possibly a corruption of ‘morfran’, the Welsh name for a cormorant.

Another possibility for the bird is the Moorcock (better known as the Grouse), a small bird not dissimilar to that depicted in the patent, and one which has often featured as a crest. But the bird probably was never resident in or near Newark. A more likely intention could be the moorhen, a waterfowl found to this day on the Trent, which may have been what was originally intended.

The question of the identity of the bird featured on the crest has unsurprisingly been the subject of much debate and some error over the years. Armorists, in compiling reference works have occasionally used the Newark arms to illustrate the definition of ‘morfex’, usually reproducing the bird as seen on the patent. On other occasions the bird has merely been changed to a more recognisable type, such as the heraldic catch-all of the martlet. Whatever the type of bird thought to be on the crest, up until around 1900 it was invariably depicted as a seated, short-legged and short-necked creature.

In 1915 the bird was described as a cormorant, without further explanation why. Since that time the bird in question has either appeared as a golden cormorant or as a heron (or egret) in its proper colours; at any rate, it then became a long-legged and long-necked species instead of the more short-necked, short-billed species as on the original image.

The motto ( 'DEO FRETUS ERUMPE' - Trust God, and sally forth) is a translation of the valiant words of the Mayor, to Lord Bellasyse, during the siege of Newark by the Parliamentarians in 1646.