From Heraldry of the World
Your site history : Newcastle-under-Lyme
Jump to navigation Jump to search 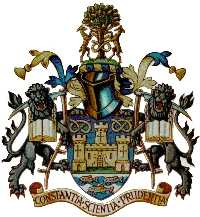 Arms : Azure issuant from a base barry wavy of four Argent and of the first charged with three Fishes naiant proper a Mount Vert thereon a Castle of three towers in chief two Stafford Knots Or.
Crest : On a Wreath Or and Azure issuant from a Mount Vert an Oak Tree fructed proper the trunk enfiled by a Stafford Knot Or between two Kids saliant respectant also proper.
Supporters : On either side a Lion guardant Sable each supporting a Scythe and gorged with a Steel Chain pendent therefrom an open Book proper edged and garnished Or.
Motto: 'CONSTANTIA SCIENTIA PRUDENTIA' - By steadfastness, knowledge and foresight.

The shield features the castle, waves and fishes from the 1951 arms of the former Borough (see iamge below), and two Stafford Knots to indicate the other two authorities. The castle and knots are in gold on blue, the colours of the Earldom of Chester, whose banner was seen in the former Borough Crest.

The crest is based on the device of Kidsgrove, which depicts kids in a grove of trees. In a more stylised crest, one of the oak trees, on a grassv mound, is shown entwined with a gold Stafford knot and supported by two kids.

The supporters are the black lions with scythes over their shoulders, which supported the 1951 arms. These emblems from the arms of the Sneyd family, were also seen in the device of Newcastle RDC. The scythe, or sned, (a pun on the name) is also a charge in the arms of the University of Keele, which is in the RDC area. As a necessary difference from the 1951 supporters, open books with gold binding and edges hang by steel chains about the lions' necks, representing the District's important educational amenities, especially the University of Keele in the rural area, linked with the engineering industry.

The motto combines elements frorn those of the old Borough and the RDC in a three-word phrase: CONSTANTIA, SCIENTIA, PRUDENTIA - By steadfastness, knowledge and foresight. 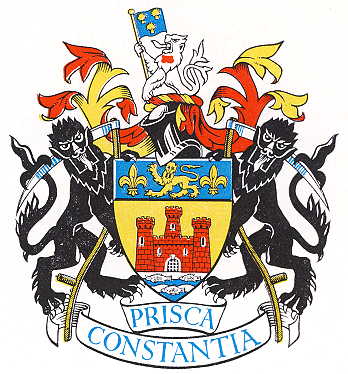 Arms : Or on a Base barry wavy of four Argent and Azure charged with three Fishes naiant proper a Castle of three Towers Gules on a Chief Azure a Lion passant guardant between two Fleurs-de-Lis of the first.
Crest : On a Wreath Or and Gules a demi Lion queue fourchée Argent charged on the shoulder with a Stafford Knot Gules and supporting a Staff proper flying therefrom a Banner Azure charged with three Garbs Or.
Supporters : On either side a Lion guardant Sable supporting a Scythe proper.
Motto: 'PRISCA CONSTANTIA' - Ancient and loyal.

The arms were officially granted on December 21, 1951.

The design incorporates many features from the Common Seal. The red castle replaces the depiction of the Guildhall and can also be seen as representing the 'new castle' built in the twelth century by the Earls of Chester. The waves and fishes also from the Common Seal are retained. The lion and fleurs-de-lis are from the arms of the Duchy of Lancaster.

The lion with the forked tail represent Simon de Montfort and the banner is that of the Earls of Chester. The red Stafford knot is a reference to the County.

The black lions with scythes over their shoulders are from the heraldry of the Sneyd family. The scythe or 'sned' (a pun on their name) is also a charge in the arms of the then new University College of North Staffordshire which was domicled at Keele Hall, a former Sneyd residence.

The motto has been associated with the Borough for very many years.

Literature : Image and information provided by Laurence Jones and from http://www.civicheraldry.co.uk