From Heraldry of the World
Your site history : Newham
Jump to navigation Jump to search 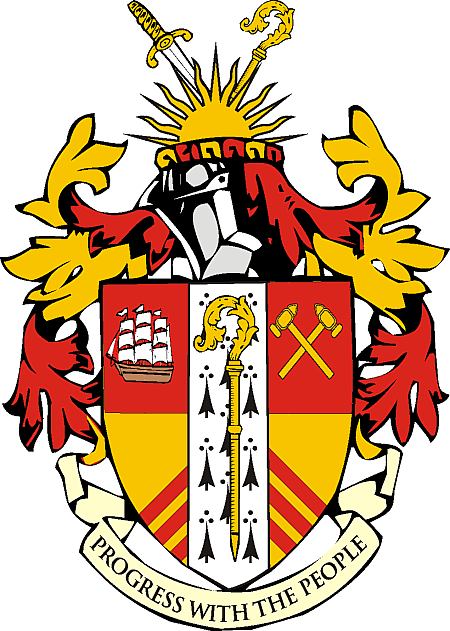 Arms : Per fess Gules and Or in chief a Ship in full sail flags flying proper and two Hammers in saltire Or in base three Chevrons Gules over all on a Pale Ermine a Crozier Or.
Crest : On a Wreath of the Colours in front of a Sword point downwards proper pommel and hilt Or and a Crozier of the last in saltire a Sun rising proper.
Motto: 'PROGRESS WITH THE PEOPLE'.

The arms were transferred to Newham in 1965, and exemplified by the College of Arms on May 20, 1966. Newham has been allowed to take over the arms granted to West Ham in 1887, with a new motto.

The crosier found in arms and crest represents Stratford-Langthorne Abbey, holders of the manor. The chevronells are from the arms of William de Montfitchet, founder of the Abbey. The colours of red and gold have been reversed from the Montfitchet arms. The ship shows that the Borough houses much of London's docklands. The hammers stand for industry and also refer to the name Ham. The motto is a translation of that formerly used by East Ham.