From Heraldry of the World
Your site history : Newmarket
Jump to navigation Jump to search 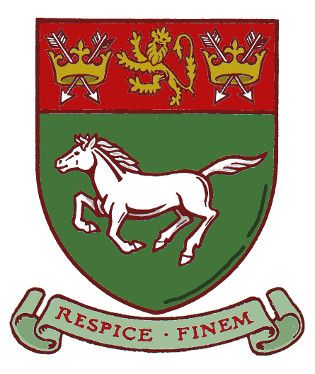 Arms : Vert a Horse courant Argent on a Chief Gules a Lion rampant guardant between two Saxon Crowns Or therein as many Arrows in saltire points downwards of the second.
Motto: Respice finem

The arms were officially granted on November 15, 1951

The green field represents Newmarket Heath and the horse is an obvious reference to the to the town's main interest. It being generally considered the birthplace and global centre of thoroughbred horse racing. The lion recalls its royal associations, with James I building Newmarket Palace, an estate covering an acre of land from the High Street to All Saints’ churchyard, and thus establishing the town as a royal resort. The arrow pierced crowns of St Edmund are like those in the arms of the former West Suffolk CC, as well as a reference to East Anglia in general.

The arms are currently used by the Town Council.